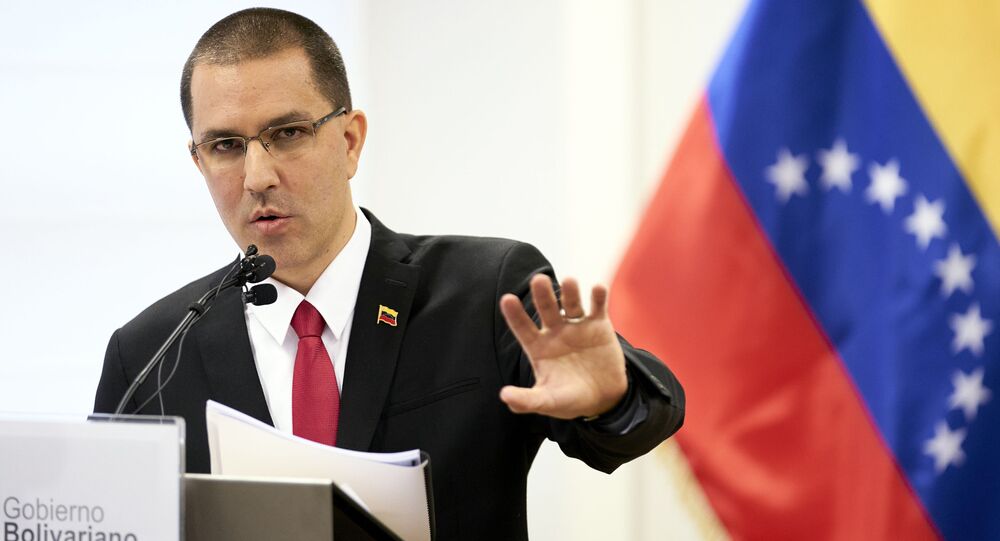 Venezuelan Foreign minister Jorge Arreaza posted a video on Monday of himself reclaiming control of his country's embassy in Bolivia, a day after left-wing President Luís Arce was sworn in in the capital La Paz.

Venezuela's foreign minister has re-taken control over his nation's embassy in Bolivia - removing a portrait of presidential pretender Juan Guaidó.

A Twitter video shows Jorge Arreaza taking Guaidó's photo from the wall and placing it face-down on the floor, before replacing it with a portrait of 19th-century national liberation hero Simón Bolívar - to applause from those present.

"With great pride we report that Chávez and Bolívar have returned to the Venezuelan diplomatic mission in Bolivia," Arreaza tweeted on Monday. He declared that Guaidó and his ilk "will not return!"

One journalist noted the symbolism of Guaidó being consigned to the "dustbin of history".  Another said Bolivar's portrait should never have been removed.

© AP Photo / Evan Vucci
Maduro: Guaido 'Dumped' Trump Despite Getting $800 Mln Over 2 Years as Media Declares Biden Victory
Guaidó's three attempts to overthrow elected President Nicolas Maduro since he declared himself president in January 2019 all failed miserably, despite political support from the US and European Union. But Guaidó's rival administration still controls the US Embassy in Washington DC.

New Bolivian President​ Luís Arce, leader of the Movement for Socialism (MAS) was sworn in on Sunday. He won a landslide victory in the October 18 election less than a year after his party comrade Evo Morales, a long-time ally of Chávez and Maduro, was ousted in a military coup d'etat.