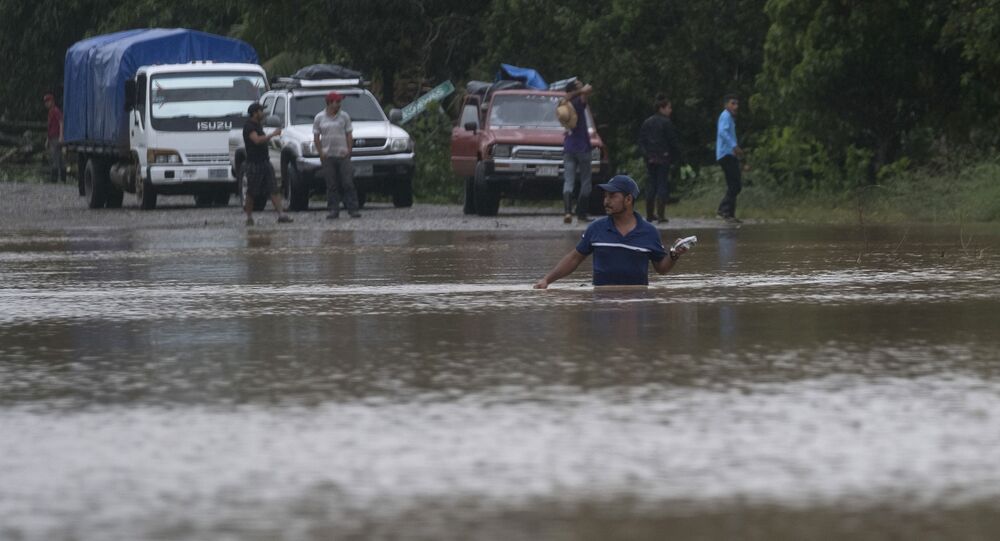 Hurricane Eta wreaked havoc on the heart of Central America overnight Tuesday, bringing with it life-threatening winds and torrential rainfall that caused waterways to overflow and prompted several landslides in the region that killed at least three people.

Having since downgraded into a tropical storm, Eta is located roughly 125 miles from Managua, Nicaragua, with maximum sustained wind speeds of 45 mph, according to the latest Wednesday update from the US’ National Hurricane Center (NHC). The agency anticipates Eta will become a tropical depression by Wednesday night.

The storm is moving west at a pace of 7 mph and is forecast to move over northern Nicaragua throughout the day before making its way to central portions of Honduras by Thursday. However, by Thursday night, the remnants of Eta are expected to emerge over the Gulf of Honduras or Caribbean Sea.

Citing weather models, forecasters have warned that Eta may make its way to southern Florida by early next week.

Having spent hours lingering along the Nicaraguan coast, the Category 4 storm came ashore Tuesday afternoon just 15 miles south of the country’s Puerto Cabezas, a vulnerable municipality that was viciously struck by Hurricane Felix in 2007 and where many of the homes are made from wood and adobe.

With many homes and businesses already destroyed in the region prior to landfall, Eta’s continued wrath saw power lines knocked out, trees downed, swollen waterways and even collapsed, washed-away bridges.

The NHC had warned that Eta would create “catastrophic” conditions, as the weather system was forecast to bring up to 30 inches of rain to both Honduras and Nicaragua, and the storm delivered.

The rainfall became so severe that several landslides were reported to first responders. In fact, landslides claimed the lives of at least three individuals - a 12-year-old Honduran girl who became trapped in her home and two miners who died in Bonanza, Nicaragua. A third miner was able to escape.

Additional landslides are expected as the two countries continue to experience torrential rains. The NHC upped its forecast and noted in its advisory that both Honduras and Nicaragua may see up to 40 inches of rain.

“This rainfall will lead to catastrophic, life-threatening flash flooding and river flooding, along with landslides in areas of higher terrain of Central America,” the agency’s bulletin states, adding that anywhere between 15 to 30 inches of rain could fall in neighboring countries.

Alex Sosnowski, AccuWeather’s senior meteorologist, recently warned that Eta may end up sticking around a little longer or even create a new storm. “It is possible we may be planning Thanksgiving dinner and still watching Eta or a spin-off from it," he said.

The official end of the 2020 Atlantic hurricane season isn’t until November 30.