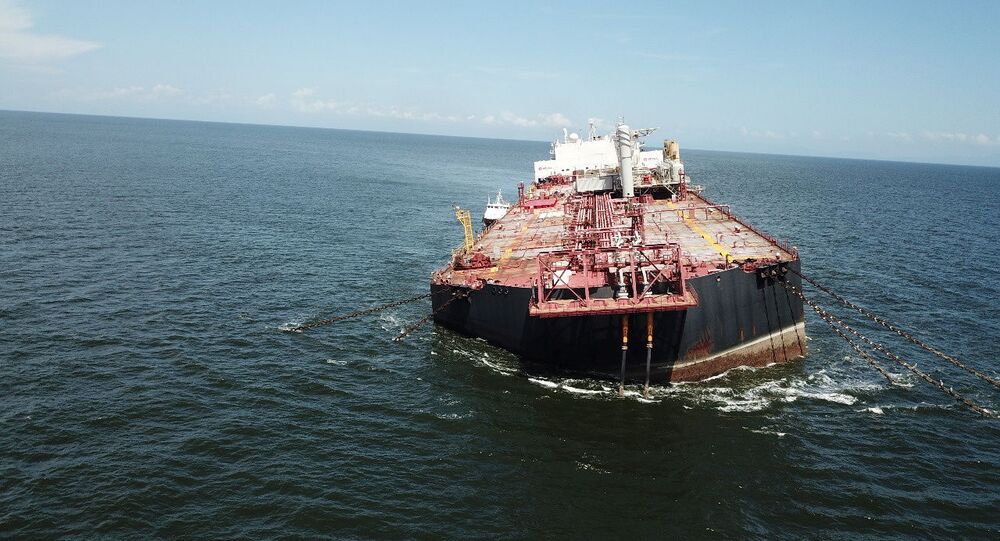 Earlier in October, Venezuela gave the green light to Trinidadian technicians inspecting the tanker, which was then found floating upright and with no water inside its double hulls.

Trinidad and Tobago's Minister of Energy and Energy Industries Franklin Khan on Thursday said that there was no significant risk to the Caribbean's ecology due to a damaged Venezuelan oil tanker.

The floating storage and offloading facility (FSO) Nabarima with almost 1.4 million barrels of oil on board is currently floating upright in the Gulf of Paria between Trinidad and Tobago and Venezuela.

Khan said that the 264-metre (866-foot) long ship is "intact and poses a minimum risk of any oil spills at this time".

Update: Crude Oil Tanker Icaro is currently along side the Nabarima and is expected to perform a Ship to Ship (STS) transfer of oil from the damaged ship.

The Venezuela-flagged barge Inmaculada is also expected to participate in the STS operation. pic.twitter.com/EWOPKyhDoY

He suggested that it would take at least 35 days to complete the process of unloading oil from the tanker to prevent a possible disaster, adding, "the [vessel's] team confirm that major maintenance is ongoing; pumps and electrical motors are being repaired and replaced as needed".

Current images of FSO Tanker Nabarima located in the Gulf of Paria. The tanker remains stable, and is being permanently monitored and assisted by Venezuelan authorities. It implies no harm or an excuse for a foreign intervention. pic.twitter.com/n0Gecy3iTN

The minister also said that a Trinidadian technical team had earlier conducted an aerial inspection of the FSO Nabarima from a Venezuelan helicopter before landing on the tanker and finding that there was no water inside and the double hulls were sound.

© Sputnik / Magda Gibelli
Venezuela Aims to Overcome Effects of US Sanctions With New Legislation, Maduro Says
He spoke amid international concerns that the vessel was allegedly on the verge of sinking and spewing its huge oil cargo into the Caribbean.

The tanker was used as a stationary platform to help Venezuela export its oil, but then became inactive as global energy demand plummeted due to the COVID-19 pandemic and the US sanctions against Caracas kept potential customers from buying the South American country's heavy crude.

US Sanctions Against Venezuela

Washington started introducing harsh economic sanctions against the Venezuelan economy, which is in the grip of an ongoing crisis, in 2018, in an effort to oust democratically elected President Nicolas Maduro.

At the time, Washington moved to freeze the US-based assets of the national oil and gas company Petroleos de Venezuela (PDVSA) as part of its efforts to sanction the nation. Caracas slammed the move as unlawful and accused Washington of seeking to get its hands on Venezuela's oil reserves. The subsequent shutdown of many PDVSA refineries prompted the Venezuelan government to consider importing fuel.