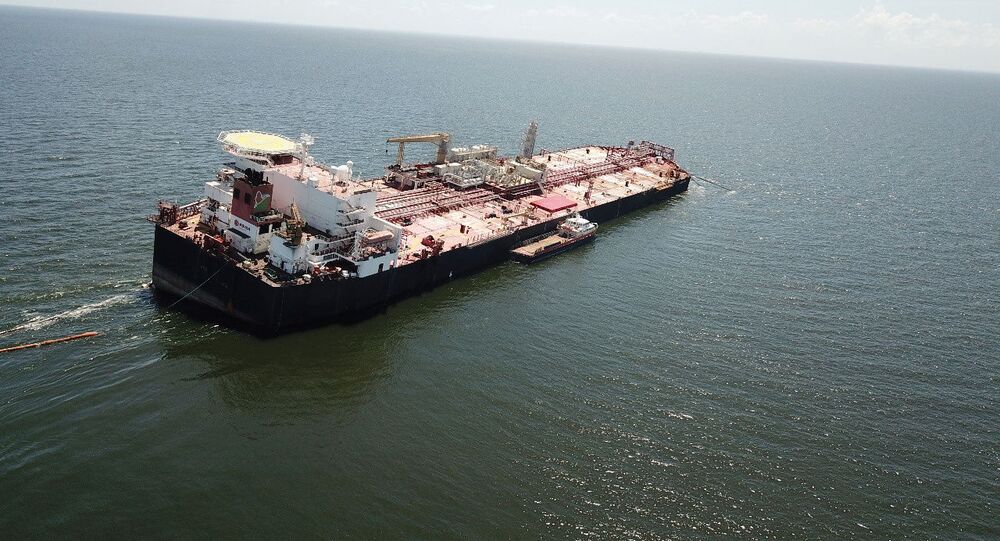 Images surfaced last week showing the Nabarima, laden with 1.3 million barrels of crude and anchored in the Gulf of Paria, tilting on its side, sparking concerns about a possible oil spill.

Sources claim a transfer of the crude from the facility via a ship-to-ship (STS) transfer is being considered amid environmental concerns.

© REUTERS / Fishermen and Friends of the Sea
The Nabarima floating storage and offloading (FSO) facility, operated by the Petrosucre joint venture between Venezuelan state oil company Petroleos de Venezuela and Italy's Eni, is seen tilted in the Paria Gulf, between Venezuela and Trinidad and Tobago, October 16, 2020

However, it was not immediately clear how the STS transfer would take place.

Earlier, Refinitiv Eikon tracking data showed that two tugboats, typically used to facilitate STS operations, were not far from the Nabarima on Monday.

The Aframax Icaro, a tanker managed by PDVSA maritime subsidiary PDV Marina, was en route to Guiria, in the Paria Gulf, according to the same data.

A source cited by Reuters acknowledged that the Icaro would be involved in the operation, possibly together with another tanker.

The move to transfer the crude is believed to have been triggered by environmental concerns, as idled Floating Storage and Offshore (FSO) vessel, which is anchored in the Gulf of Paria off the coast of Venezuela, is estimated to be holding some 1.3 million barrels of crude oil.

Another potential environmental calamity brewing off Venezuela's coast where a floating storage tanker “FSO Nabarima” holding up to 1.2mn bl of crude is at risk of sinking and spilling over into Trinidad waters and other parts of the Caribbean. pic.twitter.com/uLoBB2w5k4

​An alarming photo surfaced on 16 October showing the vessel with a severe list and at risk of capsizing in the gulf and, with environmentalists warning of a potential oil spill.

An environmental group from neighbouring Trinidad and Tobago had warned of a potential spill last week.

“We’re concerned about the natural history of the area, about the human communities that depend on the ecosystem and a healthy ecosystem… About the threatened, endemic, endangered species. And there’s all the industries, the tourism and industrial sectors. Everything is connected here,” said Gary Aboud, founder and spokesperson for the Trinidadian advocacy group Fishermen and Friends of the sea.

In September PDVSA sought to downplay oil spill risks after the vessel developed an 8 degree list in late August, reportedly the result of flooding in the engine room.

The oil storage tanker Nabarima is at major risk of sinking in the gulf of paria. These photos reportedly show the lower decks onboard the tanker filled with water. The storage tanker is apparently listing in the water. #Venezuela pic.twitter.com/K1fuXtafa4

​However, Reuters cited a source claiming that the vessel was leaning to one side to facilitate repairs.

The Nabarima facility, built in 2005, is part of PDVSA's Petrosucre joint venture with Italy's Eni SpA.

The vessel has been idled for over a year due to US sanctions on PDVSA, which prevented the company’s US-based refining subsidiary, Citgo Petroleum Corp - the company’s main crude buyer - from purchasing the oil in early 2019, according to Reuters.

Petrosucre was forced to suspend output shortly after Washington sanctioned PDVSA in January 2019.

There has not been an official comment on the report from PDVSA, which holds a 74 percent stake in the venture, or Eni, which holds the remaining 26 percent.

Venezuela has been struggling in the grips of crippling US sanctions that came in the wake of an economic crisis that erupted in January 2019.

At the time then-head of the opposition-controlled National Assembly, Juan Guaido, proclaimed himself interim president in a bid to oust President Nicholas Maduro from power.

While the United States and most Western countries endorsed Guaido, slapping Venezuela with sanctions, Russia, China, Turkey and other nations have supported Maduro as the legitimate head of state.