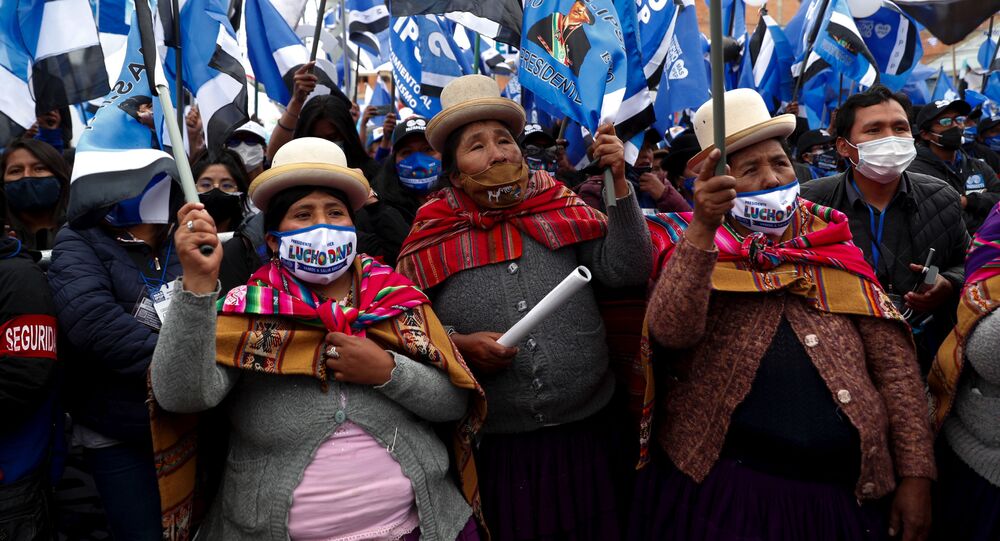 Arce has won 52.4 percent of the votes, according to the results of the Ciesmori vote count, released by the Bolivian Unitel TV channel.

Bolivia's Supreme Electoral Tribunal has announced in the early hours of Monday morning that it will suspend the counting of ballots in Sunday's presidential vote overnight.

"The Supreme Electoral Court reports that data from 2,187 polling stations has been counted as of 01:00 [05:00 GMT], which represents 6.14 percent of the total. Work will continue early in the morning to ensure transparency and confidence in the results," the court said in a statement published on Twitter.

The court, while calling for citizens to remain calm while counting the ballots, did not comment on the results of exit polls indicating that Luis Arce Catacora, the nominee of former president Evo Morales’s Movement to Socialism party, was on course to win the election.

Meanwhile official early results from Bolivia’s Supreme Electoral Tribunal (TSE), released after five percent of the votes had been counted, showed that Mesa had 50.75 percent, while Arce had 33.04 percent.

TSE head Salvador Romero, assured reporters on Saturday that vote counting would be carried out transparently and in line with the law and anybody, including journalists and international observers, would be able to monitor the process and take photos of polling station statements on votes.

Anez urged Bolivians not to engage in acts of violence on Sunday and stressed that the country "will have results that we can trust."