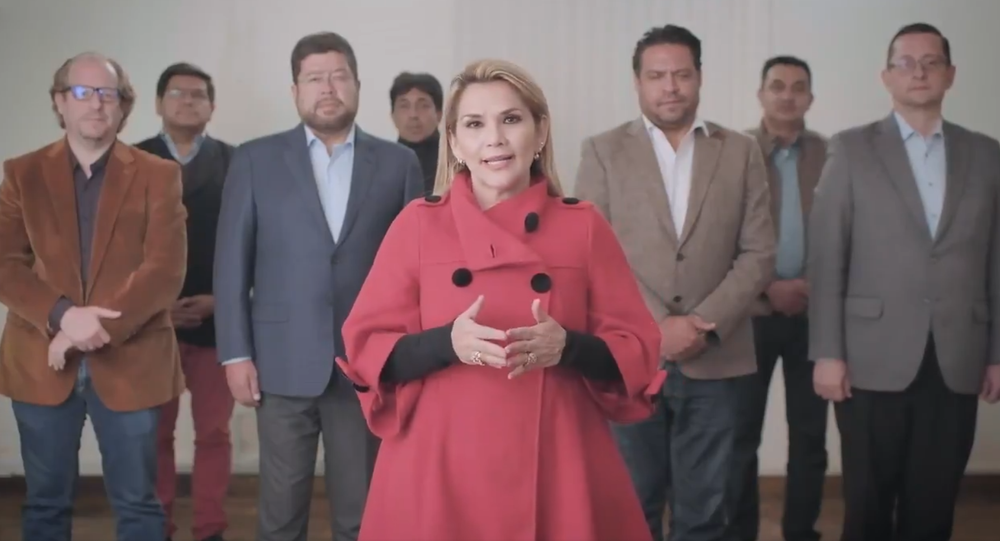 Bolivia's interim president Jeanine Añez has announced via social media that her campaign has withdrawn from the upcoming October 18 election.

"Today I put aside my candidacy in homage to freedom and democracy," the conservative interim president said in a translated tweet on Thursday.

"The stakes in this election are not small. Really, democracy is at stake in Bolivia."

Reuters reported that her withdrawal from the October 18 ballot came amid the release of opinion polls which showed her lagging behind candidate Luis Arce, who belongs to the Movement for Socialism party of ousted Bolivian President Evo Morales.

Carlos Mesa, a journalist-turned-candidate of the centrist Civic Community party, is ranked second in the polls.

Shortly after Morales secured a 10-point victory in the October 2019 presidential election, the Electoral Observation Mission of the Organization of American States (OAS) in Bolivia issued a statement arguing the results may not be accurate due to a “hard-to-explain change in the trend of the preliminary results.”

This news led to the ousting of Morales to Buenos Aires, Argentina, and the assumption of his seat by Añez, Bolivia’s second vice president of the senate.

Añez appeared in the presidential palace on November 12 and vowed to "take all the necessary measures to bring peace to the country" and carry out a peaceful transition.

However, Añez-appointed election authorities called for the elections to be pushed back a total of three times, eventually deciding on October 18, following a late July announcement.

BREAKING: Bolivia's elections have been suspended for the third time by the electoral authorities appointed by the coup President. The new date for elections will be October 18th. pic.twitter.com/a4n2rnn0GN

The Washington Post, which referred to Morales' ousting in November 2019 as simple "resignation," revealed analysis in late February that plainly stated "there isn't statistical support for the claims of vote fraud" and, overall, "the OAS’s statistical analysis and conclusions would appear deeply flawed."