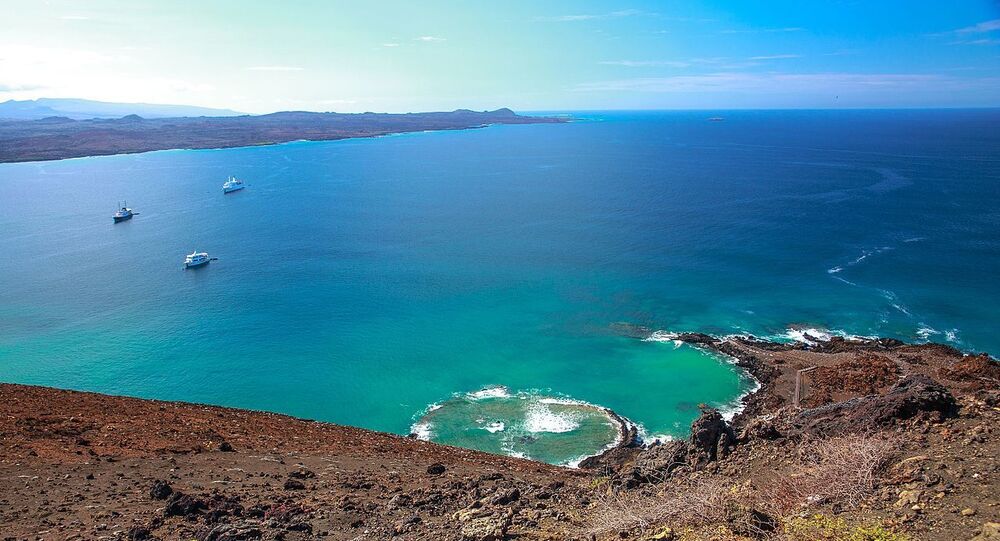 The Galapagos Islands, touted by UNESCO as “a living museum and a showcase for evolution”, are home to unique wildlife, including flamingos and giant tortoises.

The Ecuadorian Navy has increased patrols after at least 260 fishing vessels, many of them Chinese ones, were spotted near the Galapagos Islands' exclusive economic zone.

Part of Ecuador, the archipelago consists of volcanic islands located on either side of the equator in the Pacific Ocean and is home to unique wildlife, including giant tortoises.

© Photo : Marine Traffic/screenshot
A huge fleet of Chinese fishing vessels was spotted off the Galapagos Islands

The navy’s patrols come after Ecuador’s President Lenin Moreno announced a "protection strategy" for the Galapagos Islands to prevent the fishing boats from entering the area of the ecologically sensitive islands.

Moreno added that the former mayor of the capital Quito, Roque Sevilla, and the country’s ex-Environment Minister Yolanda Kakabadse, together with "more specialists", would be "responsible for designing […] the strategy and respect for its [Galapagos Islands] maritime resources".

In a tweet late last week, Moreno pledged "to protect the exclusive economic zone around the Galapagos Marine Reserve, which is one of the richest fishing areas and a hotbed of life for the entire planet", using the hashtag #SOSGalapagos.

© CC0
Species-Saving Tortoise That Fathered 800 Offspring Returns to Galapagos - Reports
Defence Minister Oswaldo Jarrin, for his part, told reporters that the country’s military is “on alert, conducting surveillance, patrolling to avoid an incident such as what happened in 2017”.

He singled out “a corridor that is international waters”, where Ecuadorian Navy ships are deployed, adding that there had been no attempts to enter the exclusive economic zone yet.

Jarrin apparently referred to an incident in 2017, when a Chinese vessel carrying 300 tons of marine wildlife, mostly sharks, was caught in the Galapagos Marine Reserve.