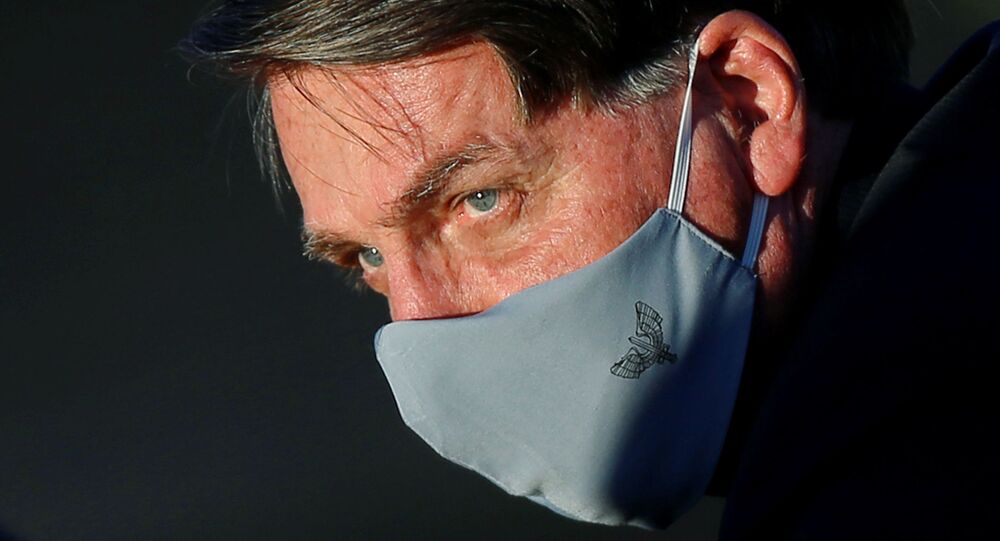 Brazil's President Jair Bolsonaro confirmed to reporters in Brasilia on Tuesday that his latest coronavirus test had come back positive, adding that a recent X-ray had revealed his lungs "were beautiful."

Just hours after announcing on 7 July that he had tested positive for COVID-19, Brazil's president Jair Bolsonaro revealed he was taking the anti-malaria drug hydroxychloroquine to treat the respiratory disease, claiming it was making him “a lot better”.

Bolsonaro, who has been openly dismissive of the disease, consistently downplaying the health crisis as nothing but a "little flu" that has to be faced realistically”, posted footage of himself taking a dose of the drug, which has been touted by US President Donald Trump but the effectiveness of which against COVID-19 has been disputed by scientists.

​The Brazilian President, 65, credited the improvement of his condition to his doses of the drug, saying:

“Today I'm a lot better, so certainly it's working. We know today there are other remedies that can help fight the coronavirus. We know none of them have their efficacy scientifically proven, but I'm one more person for whom this is working. So I trust hydroxychloroquine. And you?”

On Tuesday the President of Brazil, Jair Bolsonaro confirmed that he has tested positive for COVID-19 during an interview broadcast to TV Brasil, after he said he started feeling ill on Sunday.

The news followed reports that the Brazilian president had been experiencing coronavirus symptoms, including a temperature of 38 degrees Celsius and a blood oxygen level of 96 per cent.

As he revealed his positive test result, Bolsonaro reassured reporters that his fever had subsided, and stepped away, removing his mask.

Bolsonaro talking about his positive result, and taking off his mask... Is this still a joke to him?

​The president also told supporters that an X-ray had shown his lungs were “clean”, and he would continue working via videoconference and signing off on official documents.

A retired military officer, Jair Bolsonaro has been fending off severe criticism for dismissing measures such as lockdowns and social distancing to fight the respiratory disease, despite the soaring death toll in the country.

Brazil has been one of the countries hardest-hit by the pandemic, with more than 1.6 million coronavirus cases and 66,741 deaths.

Bolsonaro's decision to follow in the footsteps of President Donald Trump and champion the use of hydroxychloroquine resulted in Brazil losing its second health minister in a month in mid-May, as Nelson Teich stepped down from the post.

A day earlier Bolsonaro had demanded Teich issue federal guidelines for early use of hydroxychloroquine to treat coronavirus patients, despite the doubtful effectiveness of the malaria drug for treating COVID-19 and concerns voiced by scientists that it may cause heart problems, reported Reuters.

Brazilian President Bolsonaro Reportedly Says He Might Have Contracted COVID-19