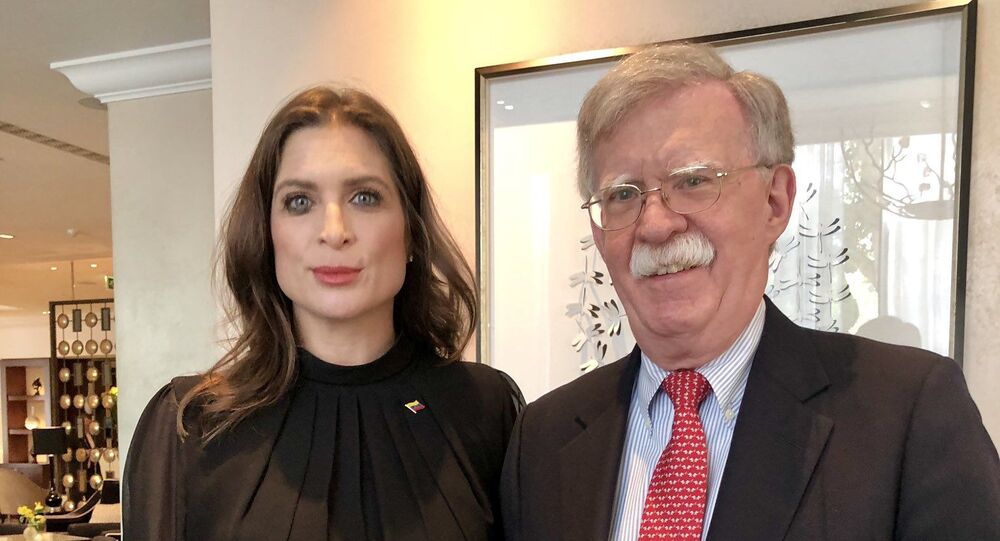 The offending tweet was sent out by Vanessa Neumann, a Venezuelan-American socialite and former Mick Jagger girlfriend tasked with representing self-proclaimed ‘interim president’ Juan Guaido in the UK.

Vanessa Neumann, Guaido’s representative in London, has had a frustrating few days on Twitter after being called out for a tweet calling for the death of Venezuelan President Nicolas Maduro.

The July 3 tweet, detected and screengrabbed by Spanish-speaking Twitter users, and brought to the attention of English-speaking audiences by independent UK-based journalist John McEvoy, features the phrases “Death to @NicolasMaduro,” and “the people will win.”

The tweet was soon deleted, with Guaido’s team issuing a statement saying that Neumann’s Twitter account had been hacked by the Maduro “regime” in response to a London court ruling last week which recognized Guaido as Venezuela’s president and denied Caracas’ request for the return of $1.13 billion in gold stuck in Bank of England vaults.

For the sake of balance the Venezuelan opposition claims her account has been hacked: pic.twitter.com/ze8cRVtzID

However, Camila Escalante, a producer and journalist for Latin American news channel teleSUR, challenged the hacking claim, alleging that Neumann herself or Guaido public relations curators in Miami and Washington may have taken the tweet down because of its ‘undiplomatic’ character.

Escalante’s response was then targeted by Asymmetrica, Neumann’s consulting company,  which tweeted Sunday that the company had “highlighted” the teleSUR journalist’s tweets, along with those of McEvoy, to the FBI’s Washington field office, claiming they were “part of a criminal conspiracy” against Neumann supported by Venezuelan Vice President Delcy Rodriguez.

We have highlighted to @FBIWFO @FBI that @camilateleSUR @pablonav1 and @jmcevoy_2 are part of the criminal conspiracy against @vanessaneumann, supporting @drodriven2. Thank you for the evidence. Welcome to the rule of law, guys. pic.twitter.com/ll9kNT6SJA

Asymmetria also attacked Venezuelanalysis.com, an independent English-language site covering Venezuelan politics, after it retweeted the screengrab of Neumann’s deleted tweet, accusing the outlet of being “a part of an indicted transnational criminal network with a price on your head,” and thanking it for “helping us nail you with the @FBI.” Venezuelanalysis.com took the allegations in its stride.

When you’re a part of an indicted transnational criminal network with a price on your head @venanalysis and @jmcevoy_2. Thanks for helping us nail you with the @FBIWFO @FBI https://t.co/SblYavte1w

First it was @jguaido's fake ambassador to the OAS gently telling us not to call his boss "self-proclaimed". Now fake UK ambassador Vanessa Neumann threatening us w/ the FBI by tagging us on Twitter. Please help us continue to piss off decadent elites: https://t.co/YRZUHlRb1S pic.twitter.com/3AbRqbrPi4

Asked to comment on the threats made against him, McEvoy told MintPress News that the accusations were “at once serious and laughable.”

“This is no way for anybody, let alone a ‘diplomat’, to behave – and the Foreign and Commonwealth office should now seriously reconsider its recognition of her in the UK,” McEvoy suggested.

Extraordinary and unacceptable threats by a woman of unknown diplomatic status against a British journalist on British soil. Juan Guaido’s overseas team very unhappy with those pursuing Freedom of Information requests - but why? ‘Democratic opposition’ meh pic.twitter.com/frIW7VqVVS

McEvoy, who has written extensively on the Venezuelan political crisis in recent years, recently revealed on the basis of documents obtained under the Freedom of Information Act that Neumann had been speaking with the UK’s Foreign Office officials about British business interests in “Venezuela’s reconstruction,” suggesting the language used could be code words for “garnering favourable conditions for British business” in Venezuela, the nation with the world’s largest proven oil reserves.

© RT . screengrab
Secret Unit in UK Foreign Office Working With Venezuelan Coup Plotters Exposed by Indy Journalist
In an interview with Sputnik about the article, McEvoy said that “when you look at the past record of British destabilization and ‘reconstruction’ – in Iraq, Libya, Syria, or Afghanistan, for instance - you get the kind of idea of what might await Venezuela should the government be overthrown…I’m sure the British population would be alarmed if it were to learn that Venezuela had a specialist unit within its Ministry of External Affairs planning for the ‘reconstruction’ of Britain.”

Guaido appointed Neumann to represent his ‘interim government’ in the UK in mid-2019, with the 47-year-old socialite then best known in Britain for her four-year-long fling with the Rolling Stones’ Mick Jagger between the late 90s and early 2000s along with several other relationships with high society figures including businessman William Stirling and William Cash, son of longtime British lawmaker Sir William Cash. After that, Neumann turned to consulting, setting up Asymmetrica.

Juan Guaido proclaimed himself Venezuela’s ‘interim president’ in January 2019, about two weeks after President Maduro was sworn in for his second term following elections the previous year. The opposition politician was immediately recognized by Washington and its Latin American and European allies, with the Trump administration slapping tough new sanctions against Venezuela’s oil sector and freezing its assets abroad. Despite the pressure, Guaido has proven unable to usurp power from Maduro, with the Venezuelan public and the country’s military remaining on the side of its democratically elected president.

Guaido did enjoy a minor political victory last week, however, after a UK court ruled to reject an attempt by Caracas to get back over $1.13 billion in gold bullion stored in the Bank of England’s vaults. Caracas blasted the court’s decision, with Foreign Minister Jorge Arreaza accusing London of seeking to “strip our country of its international gold reserves” and promising to “initiate the corresponding legal procedures to appeal such an absurd decision.”