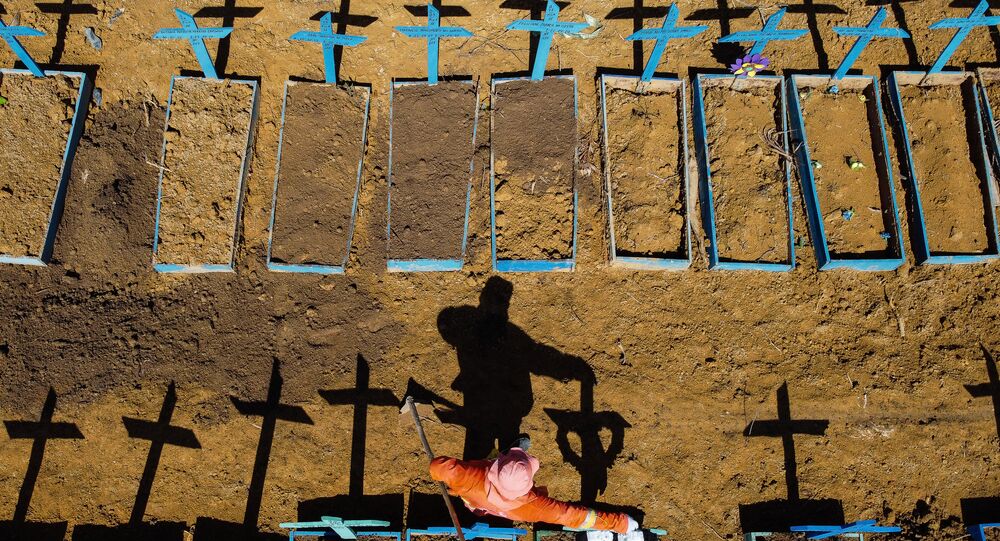 Brazil’s President Jair Bolsonaro has been under a barrage of criticism from experts, deploring the country’s statistics on COVID-19 as woefully deficient and in some instances manipulated, while the central government was slammed for its failings in handling the outbreak

Saturday Brazil deleted from its covid.saude.gov.br website the coronavirus data it had been documenting daily, weekly and monthly by state and municipality, only stating there were 27,075 new cases and 904 deaths in the past 24 hours, and adding that 10,209 patients had recovered, reported Reuters. Brazil currently has the world's second-highest number of COVID-19 cases, and has been registering a higher death tally of late than any other nation.

The page was taken down on Friday and reloaded on Saturday, offering a revised layout and only a fraction of the coronavirus data.

The country’s health ministry announced it would stop publishing a running total of coronavirus deaths and infections, reporting only cases and deaths in the past 24 hours, while omitting a total figure.

© REUTERS / Bruno Kelly
Alessandra Said, 45, a doctor at Emergency Rescue Service (SAMU) and her colleague transport a patient, who suffers from the coronavirus disease (COVID-19), from the Emergency Service to the Delphina Rinaldi Abdel Aziz hospital in Manaus, Brazil May 12, 2020. Picture taken May 12, 2020.

Late on 6 June the health ministry reported 27,075 new confirmed cases of the respiratory infection, and 904 COVID-19-related deaths since the Friday update.

According to Brazil’s President Jair Bolsonaro, the cumulative statistics did not reflect the true situation with the pandemic.

Bolsonaro went on Twitter to confirm his stance, saying that "the cumulative data... does not reflect the moment the country is in", while adding that more measures were being taken to "improve the reporting of cases".

© REUTERS / ADRIANO MACHADO
Brazil's President Jair Bolsonaro greets his supporters at the ramp of the Planalto Palace, amid the spread of the coronavirus disease (COVID-19), in Brasilia, Brazil June 5, 2020

Carlos Wizard, a businessman touted as likely to take up a high-level post in the health ministry, underscored that the federal government would be conducting a review to determine a “more accurate” toll.

“The number we have today is fanciful or manipulated,” Wizard said.

Critics have been quick to pronounce the move as seeking to conceal the true toll of the disease in the Latin American nation.

A council of state health secretaries was quoted as vowing to fight the changes introduced by Bolsonaro, who has been slammed by critics for downplaying the gravity of the coronavirus pandemic and opposing attempts to impose quarantines, curfews and social distancing. The President argued that these measures were likely to have a more damaging fallout for the economy than the pandemic itself.

"The authoritarian, insensitive, inhumane and unethical attempt to make the COVID-19 deaths invisible will not prosper," the health secretaries’ council said Saturday, as quoted by The New York Times.

Currently, the number of confirmed cases in Latin America’s largest nation is fewer only than in the US, with many health experts believing the number of infections will rise even further, insisting that Brazil is weeks away from its peak.

Last week, Brazil's death toll surpassed that of Italy – which was was the hardest-hit European country hit by the COVID-19 pandemic.
From the outset, Bolsonaro had dismissed the COVID-19 outbreak as a "media trick" and a "little flu", while publicly ridiculing quarantine restrictions.

"We will all die one day," the president said as quoted by Último Segundo in late March.

He continued to call for lockdown measures imposed by local authorities to be lifted, accusing state governors and mayors who opted for stricter measures of seeking to use the issue for political gain.

Brazil has reported 904 deaths and 27,075 cases of the coronavirus on Saturday, according to data released by the nation's Health Ministry.
It currently has 672,846 cases — the second-highest in the world after the United States.

Earlier, the country’s Health Ministry predicted that the situation with the epidemic would stabilise by July, and a gradual slowdown would start in August.

Bolsonaro Threatens to Follow in US Footsteps and Leave WHO