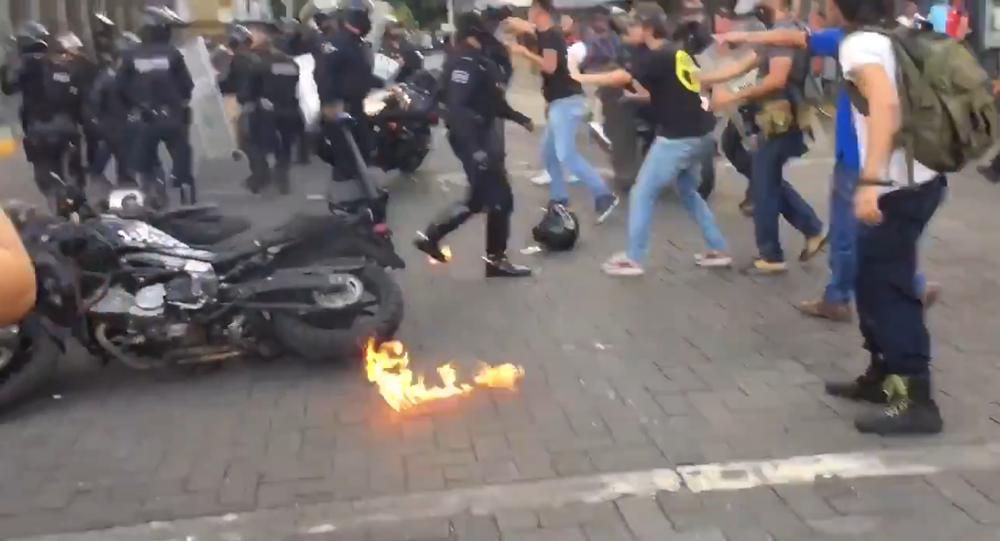 During a confrontation with police in Mexico’s second-largest city on Thursday, protesters demonstrating over the death of a man in police custody set one Guadalajara officer ablaze after spraying him with lighter fluid.

A protest against the in-custody death last month of Alejandro Giovanni Lopez, a 30-year-old construction worker from Ixtlahuacán de los Membrillos, turned violent on Thursday as a protester poured lighter fluid on a motorcycle-mounted officer and then set the man on fire.

​Several hundred protesters converged in downtown Guadalajara on Thursday, where they spray-painted slogans saying “abuse of power” and “murderous state” on buildings and set several police cars and other vehicles on fire, according to The Guadalajara Reporter.

The day prior, a video of Lopez’s violent May 4 arrest went viral on social media. In the video, bystanders can be heard pleading with police to release him; he was arrested ostensibly for not wearing a facemask. The incident followed the declaration by Jalisco Governor Enrique Alfaro Ramírez of a “zero tolerance” policy toward people being in public without safety masks to prevent the spread of COVID-19.

However, when Lopez’s family went to pick him up from the police station later, they were informed he was at the hospital in Guadalajara. By the time they arrived, he was dead. The hospital said the cause of death was blunt force trauma to the head, but he had also received a bullet wound in his foot. According to Puerto Vallarta Daily News (PVDN), Lopez had been beaten by 10 officers from the Ixtlahuacán Municipal Police.

​Lopez has now been dubbed “the Mexican George Floyd,” and the protests that erupted in Guadalajara on Thursday tapped into the worldwide outrage at police brutality fueled by the filmed in-custody death of Floyd, a black man, at the hands of four Minneapolis police officers last week.

Lopez’s family told PVDN that Ixtlahuacan Mayor Eduardo Cervantes tried to bribe them with $200,000 pesos ($9,235) not to release the video, and that they had also received threats, although the outlet did not say whom from.

Mexican celebrities are also speaking out against Lopez’s treatment and the lack of accountability in the police or government.

“We ask the Mexican government for JUSTICE for Giovanni and for all the people affected by the brutality and corruption of some members of the Mexican police. And I ask those responsible for public security to find in their hearts the strength, humanity, and honor to protect our people who are so in need of heroes and hope. Let’s change. #MeduelesMexico #justiciaparagiovanni,” film actress Salma Hayek said on an Instagram post featuring a photo of her wearing a “Justice for Giovanni” facemask.

​Mexican film director Guillermo del Toro tweeted Thursday an ad for the protest at which the officer was set ablaze, writing in the caption, “After more than a month, there are no answers, there are no arrests. It is not abuse of authority. It is murder. The nonsense - the absolute madness - is that a murder occurs in the name of a public health matter.”