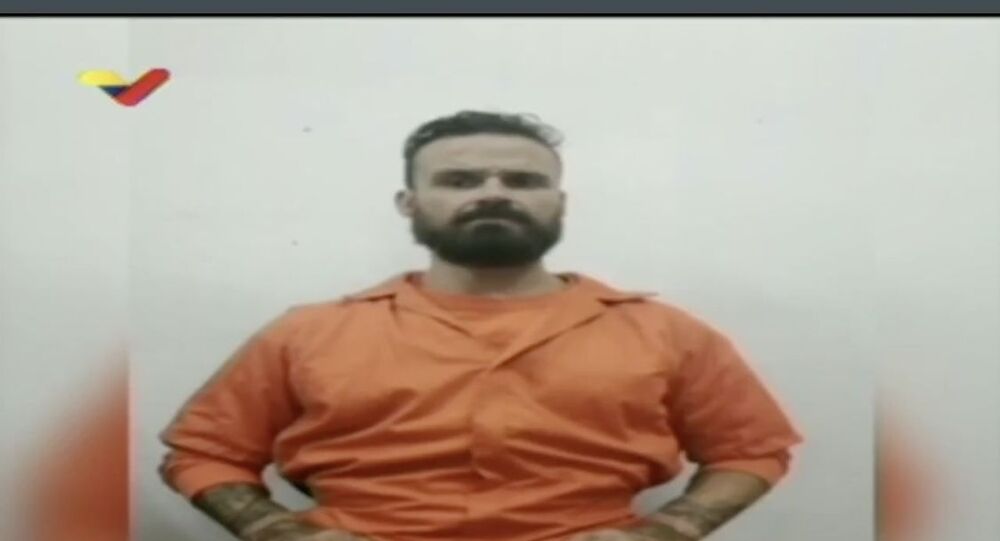 The two US nationals detained by Venezuelan security forces for their role in a failed coup attempt in the country, stated in earlier interrogation videos that their mission was to kidnap President Nicolas Maduro as part of a contract with a private security company and the Venezuelan opposition.

Two former US Green Berets, Luke Denman and Airan Berry, captured in Venezuela while taking part in an attempted coup, appeared again on the country's television in new interrogation videos recorded on Sunday, according to Venezuelan authorities.

One of the detainees stated that they were "invading a country, taking military and police targets and capturing the sitting president".

The captives, wearing orange prison uniforms, shared new details regarding their mission in Venezuela, revealing that the codeword for "the hostage, or the military target", referring to Maduro, was "jackpot".

"It was a word we used to talk about the person we’re after - the hostage or the military target", Denman said, when asked about the meaning of the word "jackpot", cited by the Daily Mail.

Denman also noted that he did not sign a "contract" with Jordan Goudreau, the head of Silvercorp, a US private security company that is believed to be behind the attempted coup. The detainee claimed that he "had a casual conversation", in which Goudreau gave him "some vague mission guidelines on training Venezuelans and coming here and putting Maduro on a plane".

Goudreau claimed that it was US-backed Venezuelan opposition leader, the self-proclaimed "interim president" Juan Guaido, who signed the contract for the mission with him and failed to pay - an assertion that Guaido has denied.

Berry, when asked why they trained for their failed kidnapping mission in an area "predominantly operated by drug traffickers", said that they "did not understand or know" that they would be travelling to "this narco area". According to Maduro, a drug trafficker known as Doble Ruedas owned the farm in Colombia that was the starting point for the mission. Berry commented that Ruedas "was in multiple times with Sequea and Pimienta", referring to Captain Antonio José Sequea and Captain Victor Pimienta, who were captured along with the other coup participants and are believed to have led the invasion.

"Yeah, Doble was in multiple times with Sequea and Pimienta. For what they met, I don’t know exactly, but met multiple times from what I know in La Guajira", Berry stated.

Over 40 people were arrested by Venezuelan authorities in connection with a failed speed boat incursion that took place in early May. Maduro accused Colombia and the US of deploying a joint operation with the goal of having him murdered. The Colombian Defence Minister objected to the allegations, saying that "this is absolutely false", and adding that the country's position on Venezuela "is clear". The Trump administration has denied the accusations, stating that there was "no involvement" by the United States in the incident. The US State Department, however, placed a multimillion-dollar bounty on the heads of Maduro and several of his advisors, if they could be renditioned to the US to stand trial under charges of drug trafficking.

Venezuela plunged deeper into a political crisis in 2019, when US-backed opposition leader Juan Guaido proclaimed himself "interim president" and stood against the incumbent president, Nicolas Maduro. Guaido was backed by the most of the Western countries, while Maduro received support from Russia, China, Turkey and other nations.