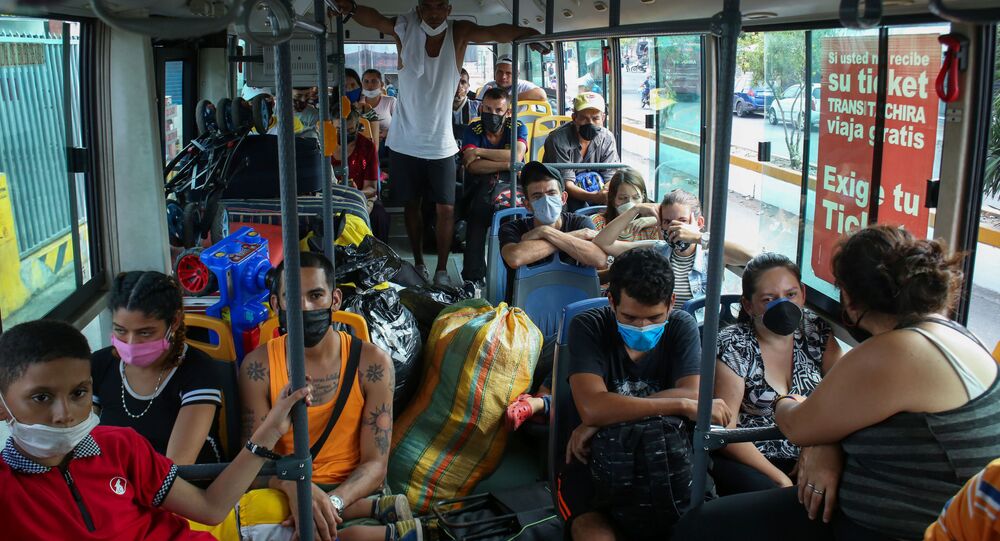 MOSCOW (Sputnik) - US Sanctions imposed on Venezuela have the sole aim of exerting pressure on the country’s leadership, particularly during the coronavirus pandemic, with the aim of initiating a change of government in the country, Carlos Ron Martinez, Venezuela’s Vice Minister of Foreign Affairs for North America said.

"They [US] have launched a military operation, it is the largest military operation in the region in the last 30 years, in order to supposedly combat drug trafficking in our region, but it’s all aimed at building pressure against us in the time of COVID-19," Martinez said during the "US Sanctions During COVID-19 Pandemic, a Global Threat" webinar broadcast on YouTube.

"We know the purpose of these measures [is] undoubtedly regime change," the minister said.

He recalled a letter sent by US Senators Chris Van Hollen and Chris Murphy to US Secretary of State Mike Pompeo and US Secretary of the Treasury Steve Mnuchin in March, calling for the easing of sanctions imposed on multiple countries, particularly Venezuela and Iran.

"We understand that the administration has stated that humanitarian and medical needs are exempt from U.S. sanctions, but our sanctions regime is so broad that medical suppliers and relief organizations simply steer clear of doing business in Iran and Venezuela in fear of accidentally getting caught up in the U.S. sanctions web," the letter says.

According to Carlos Ron Martinez, the purchases of food, medical supplies or any other products with government money in Venezuela are very problematic because of US sanctions.

"Any money that comes from the state of Venezuela or the government agencies of Venezuela may be constituted as money that was involved in drug trafficking or was involved in some illegal activity, and that means that anything that we attempt to pay, any transaction that we try to do somehow gets blocked," the minister explained.

According to Martinez, over $9 billion of Venezuelan funds have been blocked on accounts in the United States and other countries.

Meanwhile, in contrast to the US, other countries have extended a helping hand to Venezuela amid the COVID-19 pandemic.

"We have worked with Cuba, … China, Russia, who have shown extreme solidarity with Venezuela … We have received donations of equipments from China and from Russia … we received over 30,000 tests from Russia," Martinez pointed out.

In April, the Office of UN High Commissioner for Human Rights (OHCHR) said that UN human rights experts were calling upon the United States to lift economic sanctions imposed on multiple countries to ensure unhindered functioning of supply chains of medical products during the coronavirus pandemic.

According to OHCHR, the US had ignored repeated calls to waive sanctions that undermine the capacity of targeted countries to respond effectively to the pandemic. The humanitarian exemptions provided by the US Treasury Department’s Office of Foreign Assets Control on April 16 did not ease the burdensome procedure of getting medical supplies to sanctioned countries, the OHCHR said.