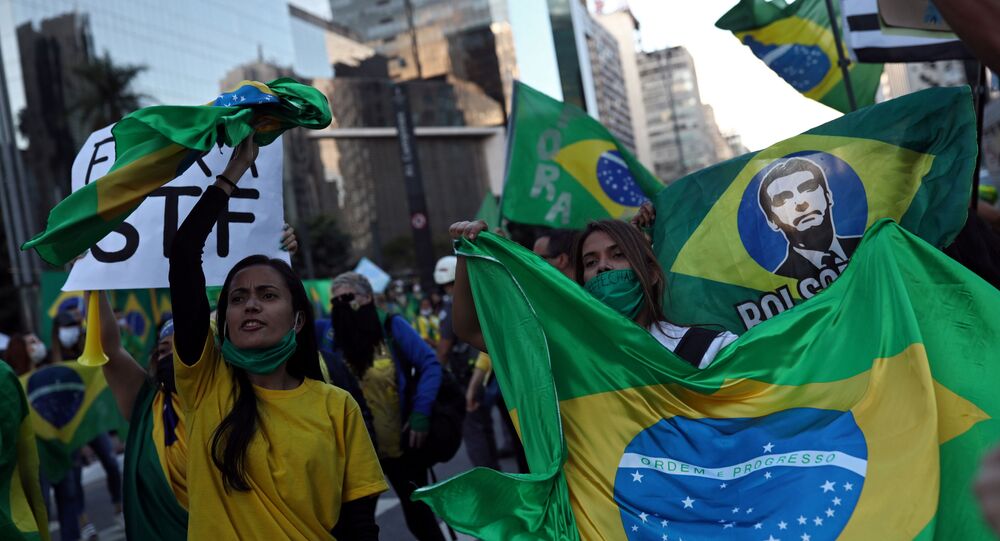 RIO DE JANEIRO (Sputnik) - Hundreds of Brazilians rallied in the capital's administrative district on Sunday in support of President Jair Bolsonaro, who has been criticized for his handling of the coronavirus outbreak.

The march began on Sunday morning with a large column of cars blocking traffic, according to the footage shared by the O Globo news channel.

#Brazil's president Bolsonaro again joined a rally of supporters attacking Congress & the Supreme Court today in Brasilia, amid #coronavirus. He told them that they had "reached their limit," that the armed forces were on his side. pic.twitter.com/0fY2RZkA6o

The pro-business president has been under fire from his own ministers and medical experts for resisting restrictions on public life aimed at curbing the spread of the coronavirus.

In a further blow, Moro, who resigned in April, testified to federal police on Saturday that Bolsonaro had interfered in judicial matters.

Bolsonaro has repeatedly dismissed the virus as a "flu" and has continued to meet with the public after a trip to the United States in March, which saw 20 members of his delegation fall ill with COVID-19. He may face impeachment for breaking self-isolation rules if he tests positive.

Rio de Janeiro Governor Wilson Witzel criticized the Sunday pro- Bolsonaro march, saying on Twitter that the president was giving a bad example by participating in a demonstration at the time when local authorities were calling for self-isolation amid the spread of the coronavirus.

Bolsonaro has been calling for limited isolation only, for high-risk groups of people, such as seniors, but regional authorities have followed the recommendations of the World Health Organization (WHO) subjecting all Brazilian residents to coronavirus restrictions.