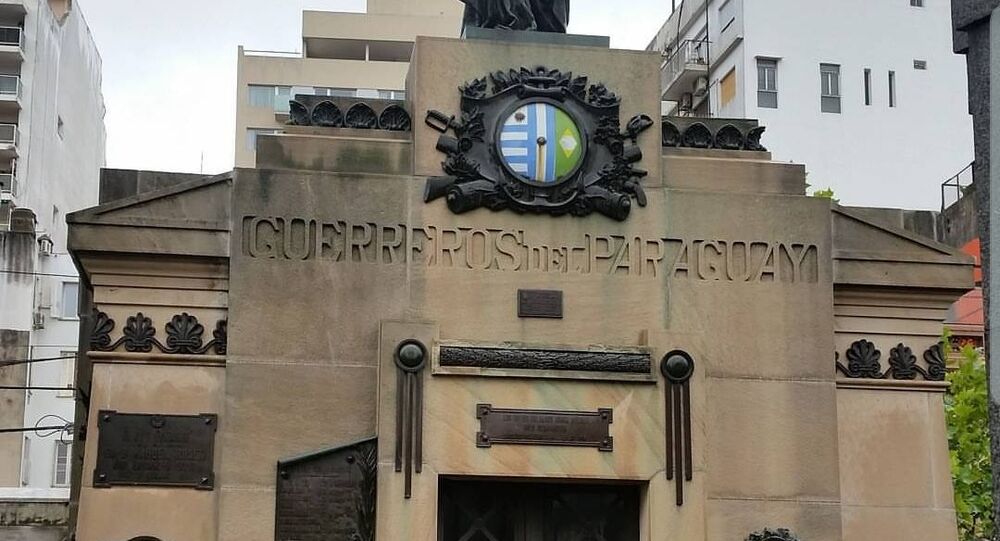 'It Still Hurts': How One Man's Dream Led to a War Which Wiped Out 90 Percent of His Nation’s Men

This weekend marks the beginning of the start of the War of the Triple Alliance, which wiped out 90 percent of Paraguay's men. But how did it start and how does the map of South America look different from how it did before the war began?

Napoleon Bonaparte, Adolf Hitler, Saddam Hussein and Francisco Solano López Carrillo - all were dictators who wanted to enlarge their nation’s territory but ended up leading their homelands to the brink of destruction.

Solano Lopez led Paraguay into a war with Brazil, Argentina and Uruguay which ended 150 years ago this month with nine out of ten Paraguayan men dead.

On this day in 1864, during the War of the Triple Alliance, Paraguay invades the Brazilian province of Mato Grosso.

This image comes from MAA 499: Armies of the War of the Triple Alliance 1864–70 and is illustrated by Giuseppe Rava. It depicts members of the Paraguayan Cavalry. pic.twitter.com/11o4XFMoQf

Jenny Dominguez, a journalist and executive producer with Paraguayan TV channel NPY, told Sputnik: “The war still hurts. Many of us believe that it condemned our future. We could never recover from that war.”

She said: "If that war had not happened, the reality of this country would be different. It devastated the republic, decimated the population, and subjected us to the allies, mainly Brazil."

The Brazilian government is still paying pensions to families of some combatants in the War of the Triple Alliance, which ended in 1870. https://t.co/9fL1gzfHmQ

In the aftermath of the conflict, huge tracts of state-owned land were sold off to foreigners to pay off the war debt.

Today 14 percent of Paraguayan land is in the hands of Brazilian farmers and a tiny elite owns 85 percent of the best agricultural land.

Solano Lopez, a former brigadier general, became President of Paraguay in 1862 - succeeding his father - half a century after the country came into existence after declaring independence from Spain.

He had spent time in France, where he became obsessed with Napoleon and he would later modernise the Paraguayan army, improving soldiers’ training, equipping it with uniforms similar to the Grande Armée and ordering weapons from Europe.

But most of these weapons had yet to arrive when conflict broke out with Paraguay’s neighbours.

In 1865 #Paraguay was one of the most important nations in South America. But then it took on Uruguay, Brazil AND Argentina in a disastrous war. pic.twitter.com/sot8DG7pfB

Paraguay was land-locked between two giant nations - the Empire of Brazil, which became independent from Portugal in 1822, and Argentina, which had only come into being in the 1850s and only included the northern half of the modern state.

Fabian Chamorro, a member of the Paraguayan Academy of History, said Solano Lopez wanted to challenge Brazilian regional dominance and found an ally in Uruguay’s President Bernardo Berro, of the National Party, known as the Blancos.

In August 1864 civil war broke out in Uruguay between the Blancos and their rivals, the Colorados, who were backed by Brazil.

150 years after the end of the apocalyptic War of the Triple Alliance, Paraguay remembers. Here, the remains of Marshal Francisco Solano López--president and commander during the war--in Asunción's Pantheon of Heroes. pic.twitter.com/s2ELR6xHSI

Mr Chamorro, a cultural ambassador and member of the Paraguayan Academy of History said: "Solano Lopez went to war because he believed that Brazil threatened the region with its war policy. Brazil unnecessarily invaded Uruguay, endangering the entire region. Paraguay considered Uruguay a strategic ally."

The Paraguayans invaded Brazil's Mato Grosso state and when Argentina’s President, Bartolomé Mitre, refused permission for his army to cross Corrientes province - the tongue of territory which separates Paraguay from Brazil - Solano Lopez gathered his country’s congress in March 1865.

​On 23 March the Paraguayan Congress bestowed the rank of Marshal-President of the Paraguayan Armies on Solano Lopez and six days later - 155 years ago on Sunday - Paraguay declared war on Argentina.

Brazil, Argentina and Uruguay formed the Triple Alliance and over the next five years they would gradually grind down the Paraguayans, who had been whipped up into a patriotic fervour and were fanatically committed to Solano Lopez.

Defeated in conventional warfare in May 1866, they fought on as guerrillas for almost four years.

Solano Lopez made his final stand at the battle of Cerro Cora on 1 March, 1870 and it was to become a scene worthy of a Hollywood film, possibly one directed by Quentin Tarantino or Sergio Leone.

His 400 men were outnumbered 10 to one by a Brazilian Army and after being routed, Lopez was surrounded by six cavalrymen but refused to surrender.

Proportionally speaking, the most destructive war in modern history was the War of the Triple Alliance (1864-1870), which took the lives of over 60% of Paraguay's population, leaving a woman/man ratio of 4 to 1.

Corporal José Francisco Lacerda - known as Chico Diablo (Devil Boy) - thrust a spear through Solano Lopez’s stomach but he still was not finished.

He evaded the Brazilians by diving into some woodland and reached the Aquidabán-Niquil stream, but was unable to climb up the steep bank on the other side.

The Brazilians found him and, when he again refused to surrender, he was finally shot in the back and his last words were: "I die with my homeland."

This day 157 years ago – 10 September 1862 – Eliza Lynch became the de facto First Lady of Paraguay when her partner, Francisco Solano López, became President of the country.

Lynch was born in Chareville, Co. Cork. She moved to Paraguay after meeting López in Paris in 1854. pic.twitter.com/bp1R2BH9vc

It took decades for Paraguay to recover emotionally, economically and politically but in 1935 they regained their national pride when they defeated Bolivia in the Chaco War and doubled the size of the nation.

​By then Bolivia had also lost the Saltpeter War - against Chile - and lost its only access to the sea, in the Atacama Desert.

Paraguayan president Solano López, who forbade whites from marrying each other and almost won a war against a coalition of Argentina, Brazil and Uruguay. https://t.co/ldb5UHdGwZ

The map of South America has remained the same since 1935 and - apart from Argentina’s failed attempt to recapture the Falkland Islands in 1982 - there has been no major conflict between countries, although Venezuela still covets a portion of Guyana.

Solano Lopez, like Napoleon in France, is still revered by many in Paraguay - his face is on the national currency and his name is born by many streets and by the presidential palace.

But Mr Chamorro said: "Opinion on Lopez is divided in Paraguay. The state considers him its ultimate hero, but opinion is divided between those who glorify him and those who accuse him of starting the war."