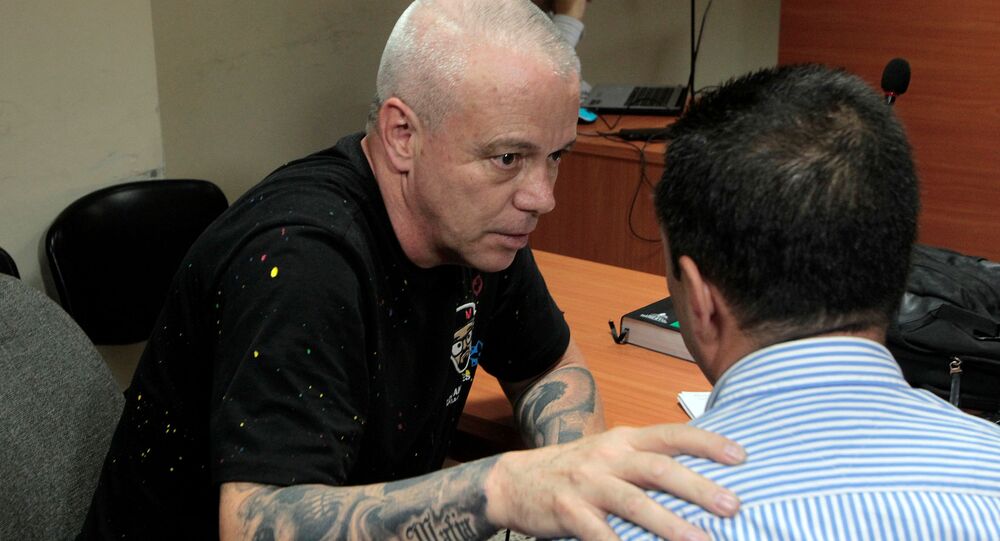 Jhon Jairo Velasquez is accused of orchestrating 3,000 hits when he worked for the infamous drug lord, including the murder of presidential candidate Luis Carlos Galan and Colombia’s Attorney General Carlos Mauro Hoyos, for which the hitman was reportedly paid $1 million.

"My dream was to watch someone put a bullet in his head", said former Colombian police officer Carlos Palau in an interview with the Daily Mail about Pablo Escobar’s ruthless hitman Jhon Jairo Velasquez, who died from cancer last week. Palau told the newspaper that he didn’t celebrate the death of his nemesis, because "no doubt he suffered a lot from the cancer", but noted he didn’t feel any sympathy for the merciless assassin. "There are still a lot of questions about his crimes that will never be answered", said Carlos Palau

The ex-policeman told the Daily Mail of his past in law enforcement when he hunted criminal mastermind Pablo Escobar and his henchmen. In 1990, a bomb exploded in the Colombian capital near a police bus and Palau rushed to the scene as he worried about his fellow officers.

"I entered the bus and saw the first body hanging out of a window. In the smoke and chaos I thought this man could still be alive so I picked him up. When I got him out of the bus I could see his head was blown completely off. Six more of my friends died that day. I wanted revenge. I asked for a transfer to Medellin and five days later I was there", the 48-year-old told the Daily Mail.

Palau transferred to the elite police unit tasked with bringing down Escobar’s infamous Medellin cartel that monopolised the cocaine trade in the United States in the 1980-1990s and conducted thousands of assassinations inside Colombia, while Velasquez coordinated the cartel’s war against law enforcement.

Palau told the newspapers that of the 152 cops who graduated with him from Colombia’s National Police Academy he only knows of three who survived the Medellin cartel era.

"I couldn't have a girlfriend, I had to cut off my family. Life was not something we could ever take for granted. 'When I said goodbye to my comrades each night we would say 'I hope to see you again'. It was more in hope than expectation", he told the Daily Mail.

Eventually Palau sought political asylum in the United States and lived in Rhode Island for nine years. After Pablo Escobar was killed and drug violence decreased in Colombia he returned to his homeland and founded a tour company. He now whisks tourists around territories once controlled by Escobar’s cartel and his ranch and tells visitors about the sacrifices of his comrades.

Palau even met his nemesis Velasquez after the latter was released from jail in 2014. "For me personally it wasn't a bad thing as I had a chance to look him in the eye. I even shook his hand. This was a man I wanted to kill for so long but that was like a form a therapy for me, it allowed me to move on and leave the anger behind. He thanked me and said, ‘thanks for forgiving and forgetting'. But I will never forget, no way", Palau said.

Despite Velasquez, dubbed Popeye for his protruding chin, being responsible for countless assassinations and violence in Colombia, he became very popular among the public following his release from jail. Locals frequently approached him to take a selfie or shake his hand. In 2017, the ruthless assassin told the Daily Mail that he personally killed 257 people and orchestrated 3,000 deaths.

"It was my job. I'm a professional assassin. Only a psycho feels pride or pleasure. I only killed when people paid me or to protect my life. I killed women, I killed children in car bombs. They were collateral damage. This was a war and innocent people die in wars", Velasquez told the newspaper.

He wrote a memoir, which was later turned into a Netflix drama, launched a YouTube channel, which amassed 1.2 million subscribers and like Palau founded a tour company. In 2017, he violated his parole and was sent back to jail, a year later he was charged with extortion, but didn’t live to see the trial. Due to cancer of the esophagus he was transferred to a hospital, where he died on 6 February.