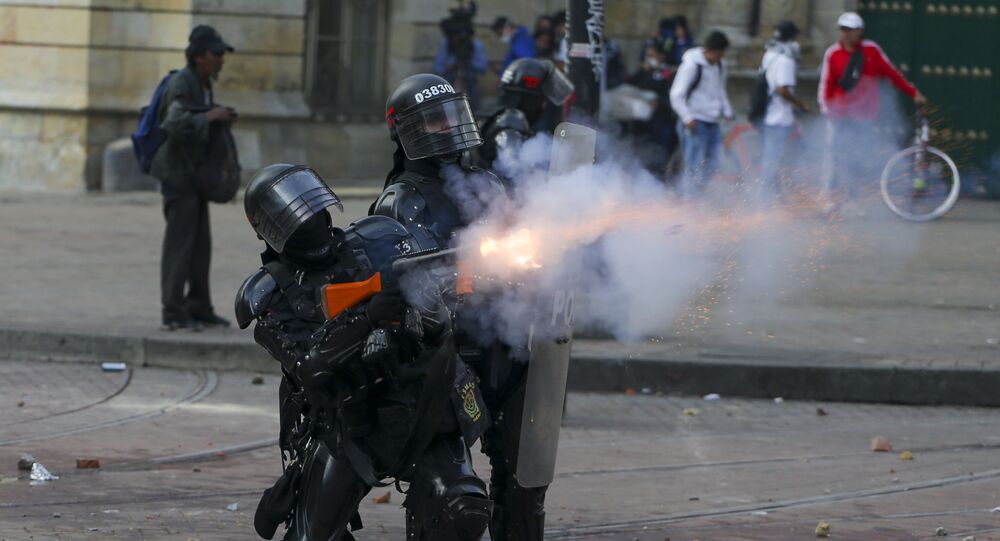 At least four demonstrators have been killed, around 500 people have been injured and 200 more arrested during the street protests which began on 21 November.

On Tuesday, a dozen people were injured as riot police clashed with protesters who blocked several streets in the capital city of Bogota, the Colombia Reports news agency said.

#ColombiaDespierto “Hey #Ivan_Duque , If you attack us in our peaceful protest then we know how to defend ourselves.”- 🌏#Anonymous 👑 King Of Kings ♠️ @Tx13Saif Akok 🎥BlindDreamPictures #Colombia pic.twitter.com/Bn2pmp7Nf0

#Colombia: Watch what happens in Colombia while Ivan Duque takes care of Venezuela .With this protest mobilizations for national strike are reactivated, convened since last November 21. In #Bogotahttps://t.co/jka0YqURI5 pic.twitter.com/BzGCipEo0k

​According to Bogota city hall, 18 peaceful demonstrations have taken place in the capital, with police using force to disperse two more which turned violent.

The news agency added that police fired tear gas at protesters in the city of Medellin after some masked men attacked the police officers near the Parque del Poblado.

Protesters also took to the streets on Tuesday in the Colombian cities of Cali, Medellin, and Barranquilla, AFP said.

The anti-government demonstrations began on 21 November following Colombian President Ivan Duque’s policies and pension reform announcements, amid a strong presence of state security forces in the streets. The protesters demand an increase in salaries, more jobs and more funding for public education.