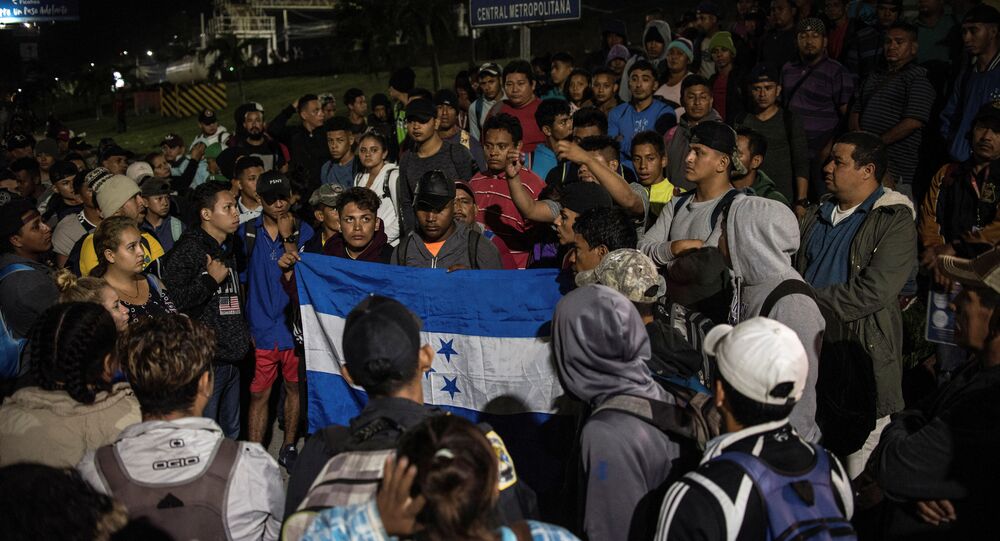 An estimated thousands of migrants from Central American nations seeking asylum in the US reportedly began to move toward Mexico in fall 2018. US President Donald Trump called the surge of arrivals a "crisis" and declared a national emergency in February 2019 in an attempt to secure funds to build a wall on the southern US border.

Hundreds of migrants, a majority of whom are said to be Hondurans, are reportedly intending to head from the Honduran city of San Pedro Sula, across Guatemala and Mexico, to the United States, forming a new migrant caravan similar to the one that traveled from the Guatemala–Mexico border to the Mexico–US border in late 2018, according to Fox News.

The group of migrants, which reportedly began to walk on Wednesday, is said to be forming a new caravan amid Mexican efforts - under pressure from the Trump administration - to block the flow of immigrants from Central American countries to the US.

Larger migrant groups reportedly divided themselves into smaller groups, heading toward different points on the US border, according to AP. Some migrants interviewed by the media outlet said they had no plans to regroup, noting that their primary goal is to enter the US.

“The truth is, it is going to be impossible for them to reach the United States. The Mexican police have a large contingent and they are going to catch all the migrants without documents and they will be detained and returned to their home countries,” said Itsmania Platero, a human rights activist, cited by Fox News.

The US reportedly signed agreements with Guatemala, Honduras and El Salvador to deny undocumented migrants the opportunity to seek asylum in the US, sending them back to their home nations.

In autumn 2018, caravans of migrants from Central American countries seeking asylum began moving toward the United States through Mexico. The Trump administration characterized the group as a "crisis" and vowed to build a wall on the US-Mexican border, a primary campaign pledge during the US 2016 presidential race.

On Monday, US media reported that the Trump administration was preparing to divert $7.2 billion in Defence Department funding for border wall construction. The funding would be used to construct 885 miles of new fencing by spring 2022, reports claim.