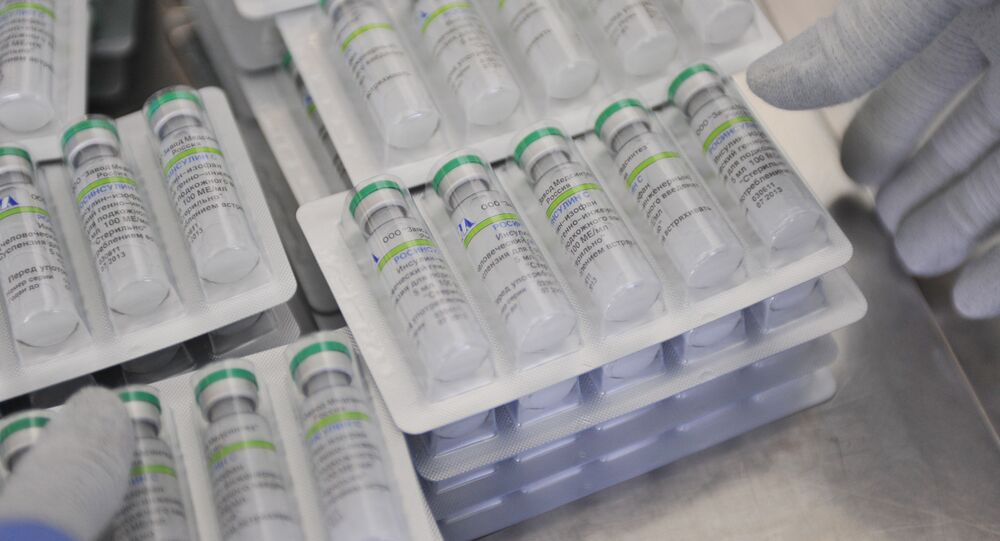 MOSCOW (Sputnik) - Russia has sent 200,000 packages of insulin medications in humanitarian aid to Venezuela, with more than 5 million packages in the pipeline to be supplied throughout 2019-2020, Russian Foreign Ministry spokeswoman Maria Zakharova said.

"We try to support every way the friendly Venezuelan people through this uneasy time for them. In this regard, we have good constructive news. Last week, Venezuela received the first batch – 200,000 packages – of insulin medications, produced by Russian company Geropharm", Zakharova said at a press briefing.

She added that supplies would continue throughout 2019-2020 with an ultimate plan "to send more than 5 million packages of this drug to ensure that more than 400,000 Venezuelan nationals suffering diabetes are provided with the vital medication".

In February, Russia sent its first batch of humanitarian aid to Venezuela via the World Health Organization and the Pan American Health Organization's channels. The second shipment arrived in mid-April. On 7 June, Russian Foreign Ministry's Director of the Latin American Department Alexander Schetinin said Russia was cooperating with the United Nations to provide Venezuela with new humanitarian aid.

© AP Photo / Fernando Llano
Venezuela Supplies Nearly $4 Billion Worth of Oil to Cuba, China Amid Sanctions, US Envoy Claims
After that, Venezuela received on 17 June its second batch of Red Cross humanitarian aid, which exceeded 20 tonnes. The delivery was in line with the agreement between Venezuelan President Nicolas Maduro and opposition leader Juan Guaido to allow humanitarian aid to the country that was brokered by the Red Cross back in March.

Venezuela is experiencing a political-economic crisis that intensified in January after US-backed opposition leader Juan Guaido proclaimed himself interim president in a bid to oust President Nicolas Maduro. The United States recognised Guaido and started imposing sanctions on Venezuela and freezing billions of dollars of Venezuela’s assets. Multiple rounds of restrictions have been since been imposed on Venezuela by countries that oppose Maduro.

Russia, which recognises Maduro as the sole legitimate president of Venezuela, has said the United States is strangling the country with sanctions in an attempt to drag it into chaos.

Maduro has called Guaido a US puppet and accused the United States of orchestrating a coup in Venezuela to force a change of government and claim the country’s vast natural resources.