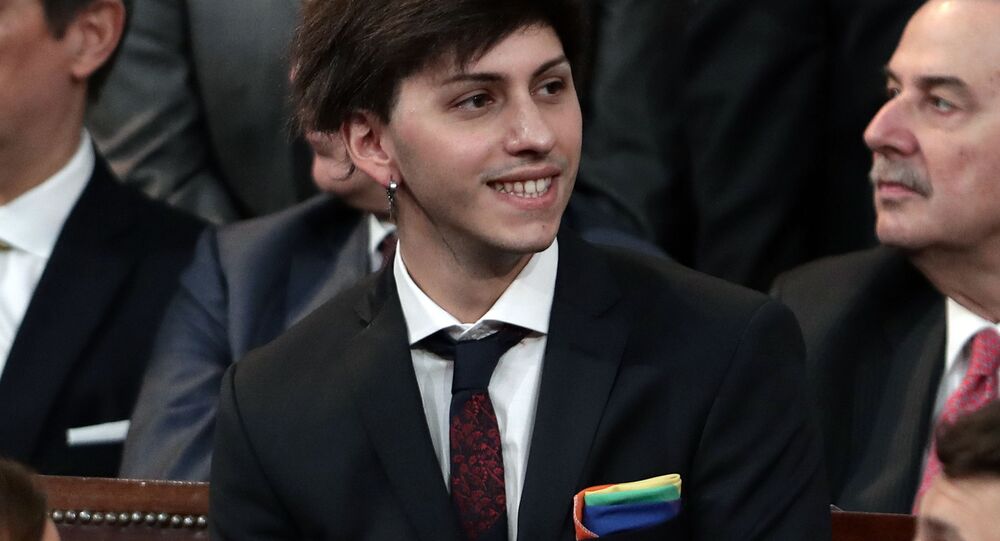 The young man who arrived at the inauguration of the Argentine President Alberto Fernández with a rainbow-coloured handkerchief in the lapel of his suit is Estanislao Fernandez, the President’s son.

On 10 December (the day of the inauguration), Estanislao sat in the front rows of the Argentinean Chamber of Deputies with a rainbow-coloured handkerchief in the lapel of his suit – a symbol of the LGTBI community. Estanislao is also known as Dyhzy, the drag queen and cosplayer in the world of social media.

Who is Estanislao Fernández?

The son of the Argentinian President is 24 years old; he studies graphic design and illustration, works in an insurance company and lives with his girlfriend in an apartment in Belgrano, Buenos Aires. However, he is not famous for being the son of the President and his ex-wife Marcela Luchetti. His popularity has grown in recent years due to his persona 'Dyhzy' and cosplay.

In June 2019, Estanislao was interviewed by Franco Torchia, a journalist for the Argentinean radio programme No Se Puede Vivir del Amor; during the interview, he said that he was always completely comfortable with his own sexuality, although he had been bullied at school.

“I was always very effeminate, and they used to call me names. In 2010, debates broke out over same-sex marriage, where out of 30 people, only four or five supported that. The rest said it was unnatural and so on,” he recalled. That same year he decided to change schools with the support of his parents.

Since 2008 Estanislao has known that his place was in social networks. He started with Fotolog. As for Twitter, he was one of the first in Argentina to start using it. The same goes for Tumblr, where he has about 50,000 contacts.

Now he is an active Instagram user and has more than 40,000 followers. Despite being an influencer, he says that he is “an ordinary person like any other.” “I have to pay the rent as well as pay for my credit cards, and I have debts,” he said.

He said he had been in a relationship with girlfriend Natalia for three years and that they had lived together for a year. She is a photographer, tattoo artist and makeup artist, and he sees her as the love of his life. “This is my first long-term relationship. My parents adore her,” Estanislao said.

Who is Dyhzy, the drag queen?

For Estanislao, being a drag queen is not only dressing up as a woman or creating a female image but expressing himself artistically. In an interview, Estanislao explained that “drag is an art that that originates in the theatre.”

The word ‘drag’ appeared in Shakespearian times when women weren’t allowed to perform in the theatre, and men played female characters. “Hence the expression ‘dressed as a girl’,” he explained.

Dyhzy’s story began in mid-2015, when Estanislao’s friend, who was a photographer, called him because she needed male and female models.

“The name Dyhzy was born by chance when I was beating my forehead against a computer keyboard because I couldn’t come up with a nickname to enter an online video game. When I started being drag queen, I wanted to change my name, and I tried La Viper, La Mamba, Shiva and others. But now it looks like I'm doomed to be Dyhzy,” he laughed.

“They always loved me very much. I remember that in 2003 when they won the elections, we went out for dinner together, and Florence (Kirchner’s daughter) spent the whole evening with me. She played with me and even gave me a sweater because I was cold,” he told the radio host.