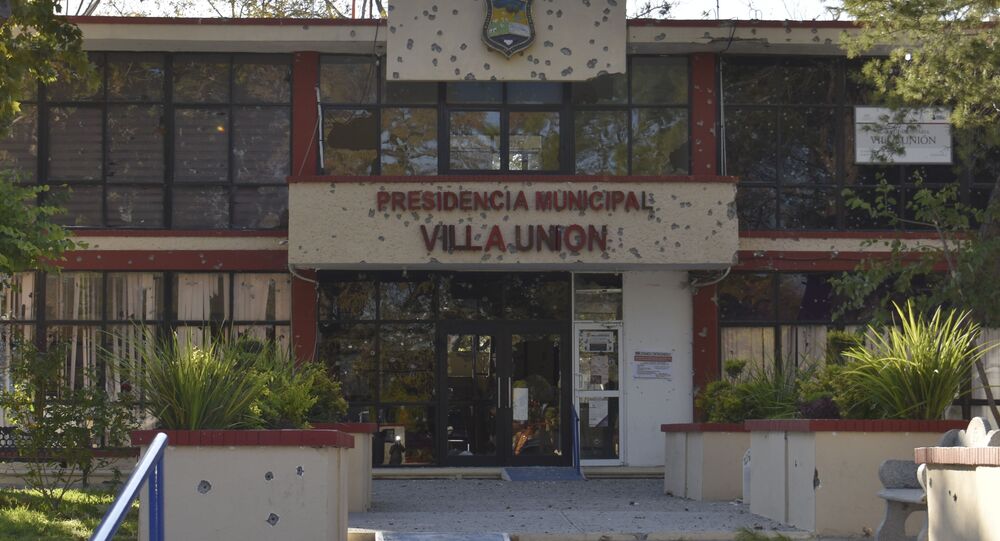 Mexican security forces shot dead at least 17 suspected cartel gunmen in the small town of Villa Union in the northern state of Coahuila, near the US border, Reuters reported on Saturday, citing the state's authorities.

Earlier, five criminals were reported to have been shot.

Coahuila's attorney general's office confirmed that the suspected criminals were killed during a gunfight.

The alleged cartel gunmen attacked the mayor’s office building, leaving the facade riddled with bullet holes, according to photographs published on the governor’s Twitter account.

At least 14 people were killed, four of them police officers, after a suspected cartel group in a convoy of trucks stormed the town, in Coahuila state
AP Photo/Gerardo Sanchez pic.twitter.com/3N2HCQhwAs

​Clashes near Villa Union were apparently captured on camera and shared on social media. The videos show a cloud of smoke rising at the scene, as well as burned vehicles.

The gunmen reportedly belonged to the so-called Northeast Cartel from Nuevo Laredo.

Raids of this type are not rare in Mexico, where violent armed groups are a sad reality.

The gunmen descended on the small town of Villa Union, about 27 miles from the border with the United States, in 14 vehicles some of which were outfitted with Barrett machine guns, El Universal cited Riquelme Solis as saying.

The gunfight took place on the same week as US President Donald Trump announced plans to label Mexican drug cartels as terrorist organisations. The move raised concerns among Mexican authorities, with the country’s Foreign Minister Marcelo Ebrard proposing a high-level meeting with the US.

Trump offered Mexico the help of the United States in launching a war against drug cartels earlier this month, following the killing of nine American Mormons in northern Mexico.