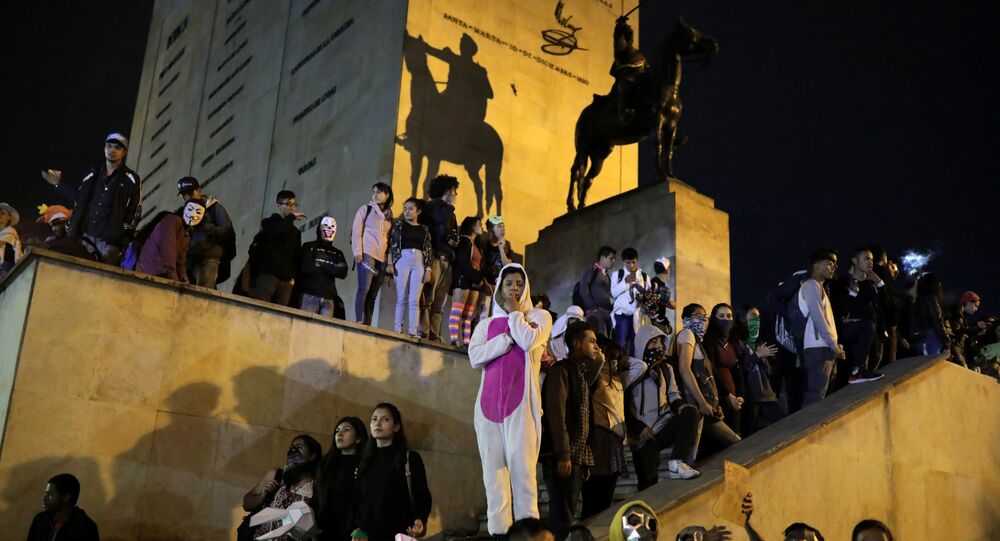 The Colombian Migration Office announced earlier this week that all border checkpoints in the country would be closed through 22 November due to ongoing protests.

Colombian President Ivan Duque imposed the curfew to the entire city of Bogota - the first since the 1970s - after peaceful protest rallies kicked off earlier this week turned violent. Earlier, Duque authorized the use of emergency means for ensuring order and safety during the protests, up to banning the possession of firearms, prohibiting the consumption and sale of alcohol and imposing a curfew. Colombian military and police were also tasked with preparing security operations.

"I have asked the Mayor of Bogotá @EnriquePenalosa to apply a curfew throughout the city, starting at 9 p.m. Our goal is to guarantee the safety of all Bogota citizens", Duque said.

​Earlier on Friday, authorities in the capital city of Bogota imposed a curfew in three districts amid ongoing protests which were reportedly initially planned to be held as a peaceful march involving students and professors. The opposition, however, announced plans to carry out a general strike on the same day.

"We are going to introduce a curfew in three neighborhoods - Bosa, Kennedy and Ciudad Bolivar - starting at 8:00 pm", the mayor, Enrique Penalosa, told a news conference earlier on Friday, cited by AFP.

Later on Friday, Duque in a televised address called for "national conversation" to discuss the grievances of Colombians that lead to the mass protests.

​"...Allow us to fight corruption more effectively and allow us to build a peace with legality for all. This conversation will take place in the regions with all social and political sectors", Duque said.

In Bogota, protesters blocked several roads and highways. Demonstrators burned barricades and threw stones at police who used tear gas and water cannons, according to the reports. Many protesters remain in the centre of the city, even as the demonstrations are blocking metro traffic in the Colombian capital.

Local media said dozens of protesters had been detained and many were injured in the violence, although specific numbers have not been reported.

Authorities have warned that the protests might provoke deeper unrest, which was the case in Venezuela and Bolivia, where riots led to a large number of casualties and significant material damage.

Demonstrators are protesting the authorities’ inaction in fighting crime and are seeking an improvement in the economic situation in the country.

According to media reports, over 200,000 people took to the streets across several Colombian cities on Thursday, including Bogota, Manizales, Cali and Bucaramanga. A curfew was also imposed in Cali.