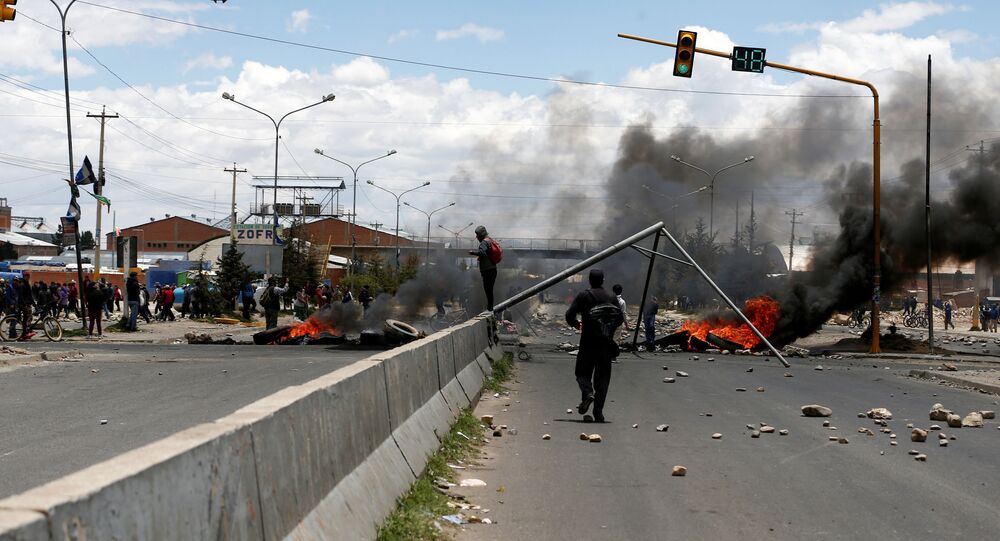 In what he described as a right-wing coup, Bolivia’s long-time president Evo Morales resigned from his post on 10 November following a disputed presidential election. The United States has since endorsed the opposition that had called for his resignation.

Evo Morales has claimed that the United States is behind the ongoing unrest in Bolivia, which has claimed the lives of several people in the days since his overthrow.

In a tweet on Monday, Bolivia’s deposed president also called out the newly-minted interim president Jeanine Anez and other major opposition figures.

“The dictatorship of Mesa, Camacho, Anez and their accomplices Albarracin and Villena caused today 6 deaths of fellow brothers in an operation coordinated with the United States,” Morales wrote.

“May the new generations and the world know that this is how the right conducts genocidal policies against the humble people.”

Carlos Mesa was Morales’ rival in the October presidential election; Luis Fernando Camacho is the chair of the Civic Committee of Santa Cruz and a major critic of Morales; Waldo Albarracin and Rolando Villena are members of the National Committee for the Defence of Democracy in Bolivia, the opposition body that co-ordinated the recent anti-Morales protests.

The Bolivian Ombudsman’s Office has confirmed that three people were killed and 30 injured on Tuesday in a military operation to clear a blockade of a major fuel plant in the city of El Alto by Morales supporters. Reports on the ground, meanwhile, put the death toll at five.

Clashes erupted between pro-Morales demonstrators and police after his resignation on 10 November. The protesters have been setting up roadblocks across the country, contributing to growing food and gasoline shortages.

Bolivia’s first indigenous leader stood down after the military and police turned against him, and he subsequently sought asylum in Mexico saying his life was at risk.

His resignation followed three weeks of anti-government protests challenging the results of the October presidential election, which saw Morales win a forth consecutive term in the first round. The opposition accused Morales of vote-rigging and refused to accept the results. The Organisation of American States, which monitored the election, said it had found “clear manipulation” of the voting system; Morales resigned on the same day.

Jeanine Anez, the deputy Senate speaker aligned with the opposition, took over as the acting president two days later and will serve in that capacity until a new vote is held.

Western countries have generally endorsed Morales’ overthrow. The United States welcomed it as “a significant moment for democracy in the Western Hemisphere”, while Russia recognised Anez as the interim leader until the next election, but still described the events leading up to Morales’ overthrow as a coup d’état.