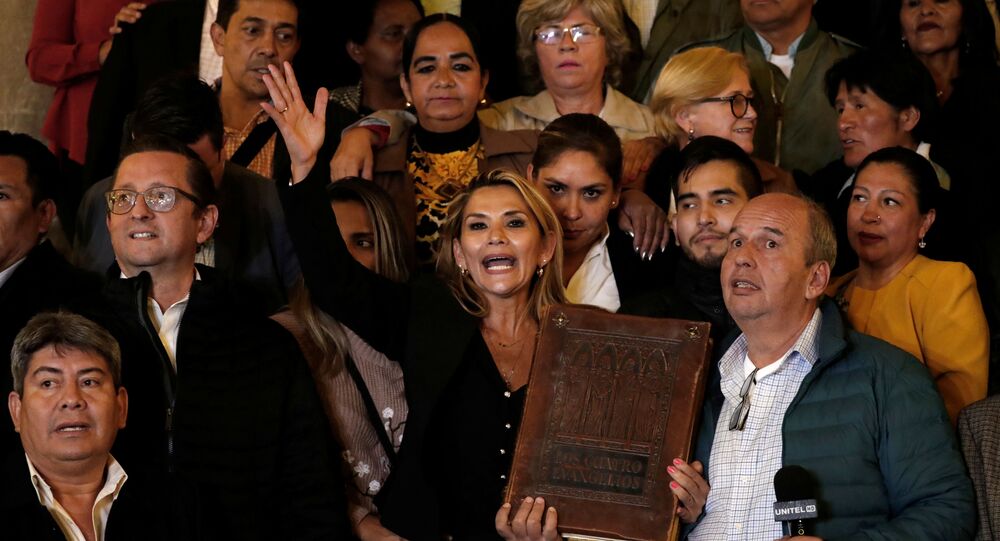 Russia sees all the events that were happening in Bolivia prior to the change of power as tantamount to a coup, Deputy Foreign Minister Sergey Ryabkov said on Thursday.

Moscow recognises former Second Vice President of the Bolivian Senate Jeanine Anez as interim president of the Latin American country, Russian Deputy Foreign Minister Sergei Ryabkov stated on Thursday. He noted, however, that Russia is still concerned by the political crisis in Bolivia, stressing that Moscow is worried about the absence of a parliamentary quorum.

"But we also noted that at the time of her approval in Parliament there was no quorum, which is necessary... it is clear that she will be perceived as the head of Bolivia until a new president is elected, and this is the internal affair of Bolivia", he added.

Ryabkov said that the events recall certain groups that use illegal methods to reach their political goals. He also noted that Moscow still sees all events prior to Morales' resignation as coup d'etat. Several countries, including Venezuela, Cuba and Mexico, have already described the events in Bolivia as a coup.

Previous Bolivian President Evo Morales was forced to resign on Sunday, facing pressure from the military and police amid opposition-led protests against his re-election in a 20 October vote. After being in power for more than 13 years, the politician had to step down and fled to Mexico, which has granted Morales asylum.

After the vice president and other high-ranking officials refused to take over the presidential office, an extraordinary parliamentary session that was supposed to officiate the resignation of Morales proclaimed Jeanine Anez interim president.

The opposition MPs, however, made the decision in the absence of lawmakers from Morales' governing party Movement for Socialism (MAS), which holds the majority in Bolivia's Legislative Assembly, thus, the necessary quorum was not reached.

while Venezuela, Cuba, Mexico, and Nicaragua have described the shift of power in Bolivia, accompanied by violent clashes, as a coup.