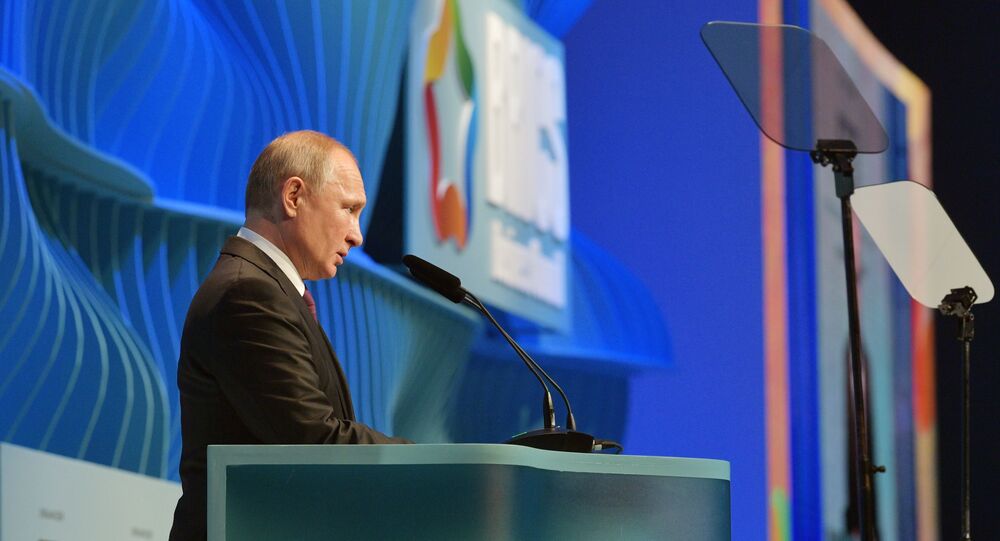 The two-day 11th summit of BRICS member states — Brazil, Russia, India, China, and South Africa — kicked off in Brasilia on Wednesday and has gathered the leaders of the international association, which aims to promote multipolarity on the global scene.

Russian President Vladimir Putin is giving a press conference on the second day of the BRICS summit in Brazil. Earlier in the day, the Russian president had a meeting with his Brazilian counterpart Jair Bolsonaro.

The meeting with Bolsonaro was dedicated to issues of bilateral cooperation, current international issues, and regional matters, including the situation in Bolivia.

The Russian head of state spoke about Moscow's agenda for its 2020 presidency of BRICS. Topics including the strengthening of BRICS countries' strategic partnership and cooperation have also been discussed.

He also said that CIS countries and EURASEC will be invited to attend the BRICS summit in Russia next year.

"As for inviting other countries, this is a common practice ... We plan to invite our regional economic organisations, first of all, the EAEU, and the CIS. It will be a completely natural meeting of partners, if not in the framework of BRICS, then in another organisation," Putin told reporters at a press conference following the 11th BRICS summit in Brazil'', the president said.

In response to the proposal to include China in Russia-US strategic arms talks,  Putin suggested the addition of France and the United Kingdom to the list of participants.

"First, it's true — Russia and the US are the largest nuclear powers in the world. Secondly, if you add China [into strategic arms talks], then why only China? Let's add both France, the UK and other countries that are not officially recognised as nuclear powers, but everyone in the world knows that they are", Putin said .

'Bolivia on the Brink of Chaos'

Commenting on the political crisis in Bolivia, Vladimir Putin said that there is practically no rule of law and the country is ''on the brink of chaos''.

"A situation has arisen when there is no power at all ... Anarchy. In general, it reminds Libya. Although there is no direct armed invasion from the outside, the country is actually on the verge of chaos. This, of course, is an alarming signal", the president said.

Still, he expressed hopes that bilateral cooperation between the two countries will continue, no matter who will assume the power.

"We, on our part, are ready to cooperate with any authorities that receive a legitimate mandate", the Russian president stressed.

'Russia, For Most Part, Accomplished All Set Tasks in Syria'

"Russia aimed to prevent the infiltration of a large number of trained militants with military experience on the territory of Russia. In this sense, we can't fully assert that we have solved all 100 percent of the tasks, but in general, yes, we have fulfilled the task that we set when we started the operation in Syria", the Russian president said.

Putin Says Recognises US Contribution to Fight Against Terrorism in Syria

"As for the US contribution to the fight against terrorism in Syria. There is a contribution. We must recognise this and say so openly. Including the contribution of President [Donald] Trump", Putin said.

At the same time, he noted that before Russia came to Syria, the US-led international coalition had been "treading water" there for several years.

"Even within the framework of the election campaign, this would be correct. But this is not for us to decide", Putin told reporters.