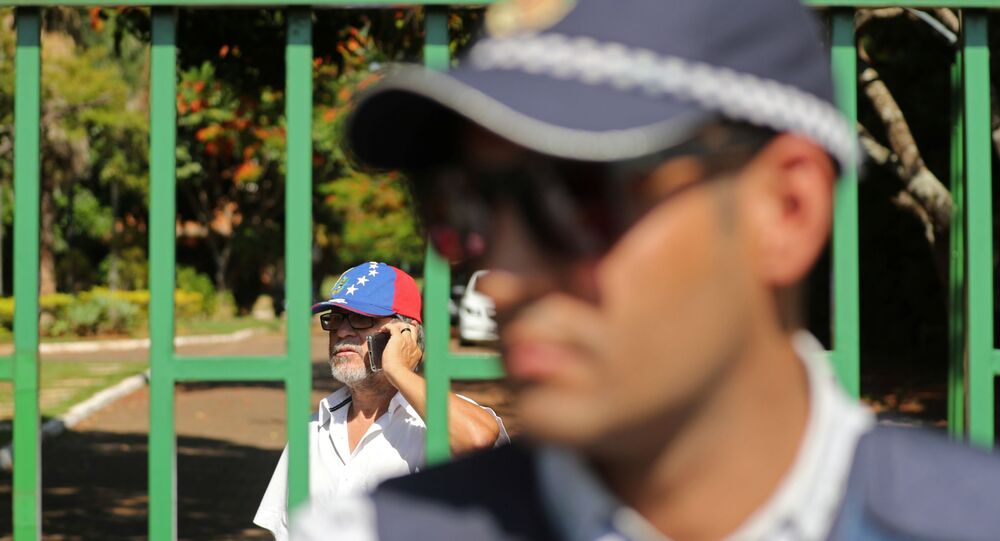 Earlier, several media outlets reported that the embassy had been invaded by people linked to Venezuelan opposition leader Juan Guaido. The latter proclaimed himself interim president of the country in January 2019 and unsuccessfully tried to oust the elected president, Nicolas Maduro.

"We do not have much information so far, but at 4 a.m. irregular groups linked to Guaido violently entered the embassy in an attempt to occupy the building", he said.

Gil called on the Brazilian government to intervene in the situation and protect the embassy under the Vienna Convention. He warned that otherwise the attack might become "an important precedent".

A group of people are still protesting outside the embassy following the unsuccessful takeover attempt. Follow Sputnik's live feed to find out more.

A source in the Brazilian Foreign Ministry has said that a Brazilian diplomat was sent to the Venezuelan embassy in order to settle the dispute between its staff and Guaido's supporters. The source stated that the safety of those inside is the "priority".

Brazilian daily newspaper Estadão has reported, citing representatives of Juan Guaido, Venezuela’s self-proclaimed interim president that the embassy's personnel opened the doors to the people, loyal to the self-proclaimed president, voluntarily and reportedly recognised Guaido as the legitimate president.

However, several media outlets reported Venezuelan chargé d'affaires in Brazil, Freddy Meregote, as accusing the intruders of violating Venezuelan territory and calling on social movements and parties to help repel the invasion. Brazilian lawmaker Paulo Pimenta noted "a pretty violent dispute" taking place on the embassy's premises between the staff and Guaido's supporters.

"The embassy has been besieged by a group of Brazilians and Venezuelans since early morning, there are signs that the police of the Federal District or the Foreign Ministry have supported or protected the actions of the rebels and intended to take the place by force," Pimenta said.

A group of people tried to force its way into the Embassy of #Venezuela in #Brazil on Wednesday, according to a Brazilian lawmaker Paulo Pimenta, a member of the Workers' Party. There has been "a pretty violent dispute" btwn the attackers who support Guaido and embassy staff pic.twitter.com/6bhZg6hfPk

The unverified Twitter account believed to belong to Venezuelan Deputy Foreign Minister Yvan Gil has also reported the invasion attempt, calling on Brazilian authorities to respect their international agreements and protect the embassy.​ Jandira Feghali, a member of the Communist Party of Brazil, reported the incident as well, calling it an "attack on sovereignty and democracy".

Previously, American authorities forced Venezuelan diplomats to leave their embassy in the US and handed over its facilities to representatives of Juan Guaido, the Venezuelan opposition leader, who proclaimed himself interim president in January 2019.

Brazilian authorities have recognised Guaido's claims to the presidency, along with many western countries including the US. At the same time, several states, such as Russia, China and Turkey, condemned such moves and expressed their support for democratically elected President Nicolas Maduro. The latter has called Guaido a US "puppet" and accused him of organising an unsuccessful coup 'd'état late in April 2019