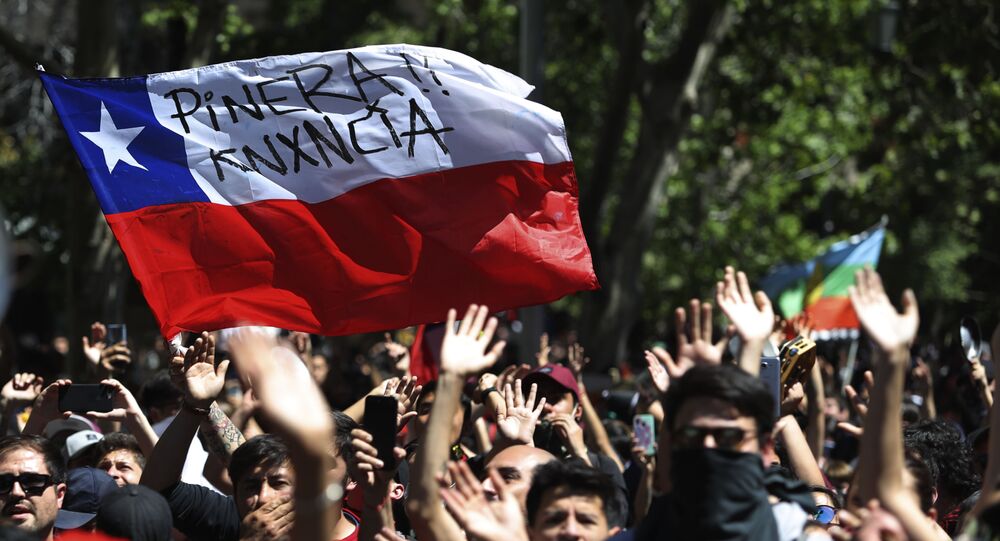 Chile, Latin America’s 2,653 mile-long, Spanish-speaking country, has been embroiled in mass protests for several days, with the movement only growing stronger as Chileans hit the streets to rise up against what they see as injustices dealt by the administration of Chilean President Sebastián Piñera.

Demonstrations in Chile recently initially erupted as a result of Piñera administration’s decision to hike up transportation prices, specifically the cost of the highly-used metro system, which increased by roughly 4%. The price increase went into effect on October 6, and protests, mostly by high school students, followed shortly thereafter.

​Videos shared across social media platforms show hundreds of Chileans jumping metro turnstiles and sitting down on train platforms in protest of the price hike, while others opted to break down said baffle gates as an added message to the administration.

Although the growing intensity of the demonstrations eventually forced Piñera to suspend the fare increases, it also spurred the president to declare a state of emergency. Piñera’s declaration saw a curfew imposed in the capital of Santiago and multiple neighboring provinces, and the military was ordered to hit the streets, moves which haven’t been seen or experienced by Chileans since the times of US-backed dictator Augusto Pinochet. On Monday, the administration imposed a curfew for the third straight day.

Many social media posts have, in fact, likened the current environment to the Pinochet regime, a military junta that severely oppressed opposition through mass arrests and murder from 1973 to 1990.

While some soldiers are responding to the looting that such mass events birth, videos have also shown service members violently attacking protesters who are simply partaking in the peaceful demonstrations and the “Cacerolazo,” a form of protest in which groups of people make noise by banging pots and pans. The latest figures suggest more than eight individuals have died as a result of the demonstrations.

​But as protests have continued, demonstrations have taken on a new meaning. Now, Chileans are taking to the streets to voice their opposition to years’ worth of legislation and backdoor government dealings that have caused extreme inequality and a lack of real opportunity for working Chileans.

​Appearing to take a note out of Puerto Rico’s book, Chileans are also calling for Piñera to resign from his post so that real change can take place in the country. It’s unclear when or even if the Chilean president is considering stepping down.

Andrea Alvarado, a member of the central committee of the Social Convergence Party who has been active in the recent demonstrations, told Radio Sputnik's Loud & Clear on Monday that the mass uprisings aren't likely to end anytime soon.

"This movement is not going to end now or tomorrow or the next few days," she told hosts John Kiriakou and Walter Smolarek. "Something was triggered here that had been ... this was a time bomb that had been ticking for a very long time."

"As people said, it's not 30 [Chilean] pesos ... it's [about] 30 years [of oppression]. People are not going to back down their demonstrations," she stressed.

Although Alvarado was unsure whether the demonstrations will ultimately result with Piñera resiging, she noted that the next steps for the mass movement should include Chileans "organizing [and] talking to their neighbors."