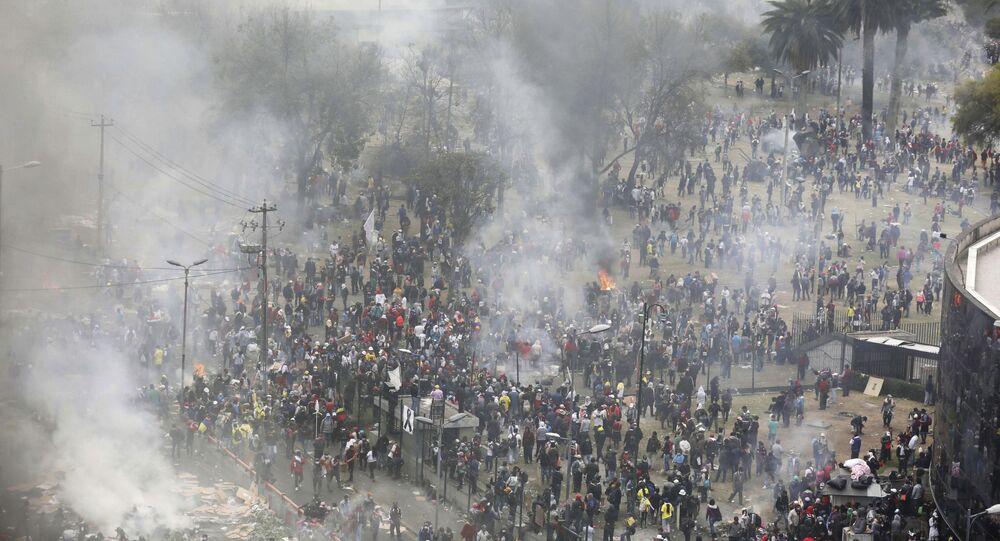 The Mexican embassy in the Ecuadorian city of Quito has offered, meanwhile, protection along with shelter to local opposition lawmaker Gabriela Rivadeneira, Reuters reported Saturday, citing the Mexican Foreign Ministry.

Rivadeneira, the former president of the Ecuadorian national assembly, has been a vocal critic of Moreno's policies. Earlier in the day, she urged protesters to continue rallying against the proposed austerity measures.

Currently, Rivadeneira has joined the political party of former Ecuadorian President Rafael Correa, whose allies have been accused of stirring up a revolt against Moreno.

Moreno has declared a state of emergency in connection with the protests and moved the government headquarters from the capital of Quito to the city of Guayaquil, located in the west of the country.

Protests were initially staged by transport companies, which rallied against the scrapping of fuel subsidies, but organizations from other industries soon joined. Moreover, indigenous groups have also engaged in the anti-austerity protests, demanding dialogue.

The Ecuadorian president declared that the austerity measures would not be scrapped, noting that he was ready to meet with representatives of the indigenous peoples to discuss their demands.

Earlier on Saturday, the Ecuadorian Armed Forces imposed restrictions on people’s movement in “strategically important areas” across the country, amid the ongoing wave of protests in the South American nation. Moreno imposed a curfew in Quito and in the outskirts of the city. The Ministry of Tourism has called on tourists to stay inside their hotels and inside the airport of Quito.

Ecuador's economy is suffering from a heavy debt burden of some $3.6 billion, which ballooned under the previous leadership. Moreno has been adamant about slashing the debt to about $1 billion by 2020.