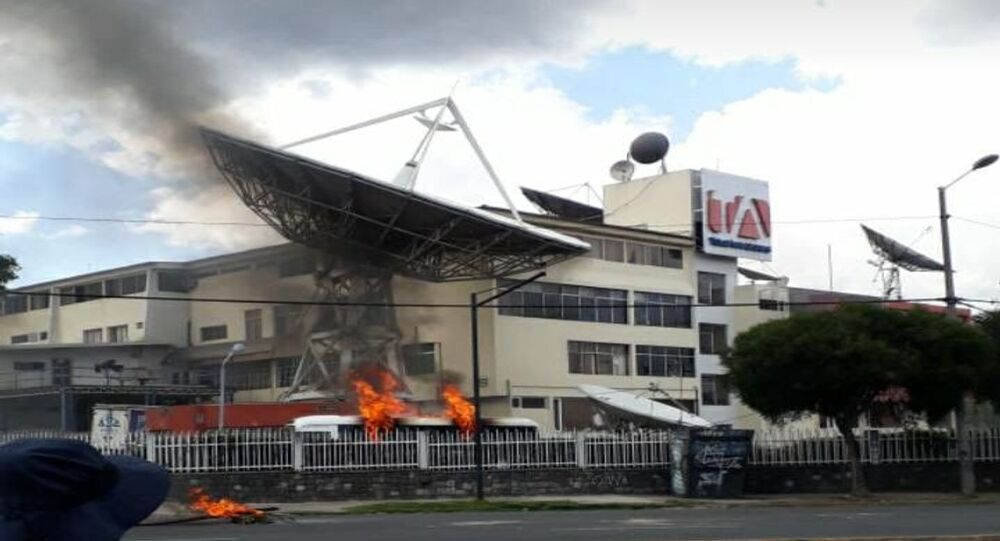 Mass protests erupted in Ecuador in early October following a move by lawmakers to end decades-long fuel subsidies for citizens.

Protesters in Quito were reportedly trying to "forcefully enter the facilities" of newspaper El Comercio, according to local journalism advocacy organization Fundamedios.

El Comercio later confirmed reports that its facilities were attacked on Saturday evening by "a group of strangers."

A facility belonged to local TV channel Teleamazonas was attacked by alleged protesters who threw Molotov cocktails at the channel's building.

​Teleamazonas shared a photo showing a bus belonging to the channel that was burned by protesters. According to ​Teleamazonas, there were 25 people inside the bus when protesters started throwing Molotov coctails.

​Earlier in the day, Ecuadorian President Lenin Moreno announced a curfew and militarization for Quito slated to start at 3 p.pm. local time. The measure is meant to "facilitate the activities of law enforcement agencies against excessive violence."

Mass protests erupted in Ecuador in early October as thousands rallied across the country against the government's so-called economic reforms, specifically a decision to end decades-long fuel subsidies for people. As civil unrest grew progressively more violent, Moreno declared a national two-month state of emergency. According to Moreno, Ecuador could no longer afford the subsidies and the cuts could help the country save some $2.27 billion a year.

The abolition of fuel subsidies is intended to be part of the Ecuadorian government's austerity deal with the International Monetary Fund to become eligible for a $4.2 billion loan.