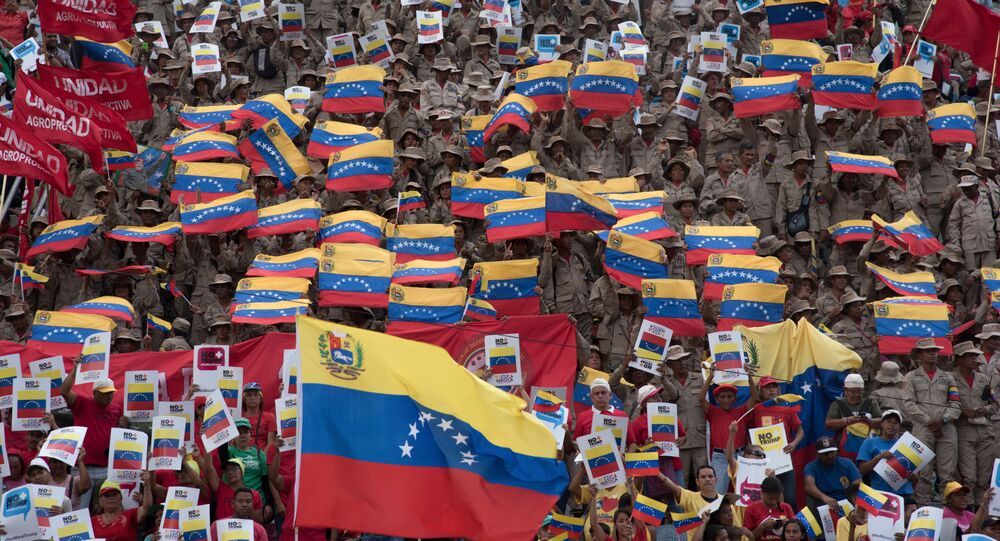 Earlier, US media reported that American officials were in secret talks with President Nicolas Maduro's senior aides about the prospects of him stepping down and facilitating fresh elections in the Latin American country.

US policy on Venezuela has not changed, and will not change so long as Nicolas Maduro is in power, Secretary of State Mike Pompeo has said.

"There's been no change in US policy [on Venezuela]. We have consistently said that there cannot be free and fair elections so long as Maduro is on the scene, and we continue to work toward achieving that end on behalf of the Venezuelan people," Pompeo said, speaking alongside Canadian Foreign Affairs Minister Chrystia Freeland in Ottawa on Thursday.

Praising Canada's role in the Venezuelan crisis, Pompeo said that "both of our nations have helped galvanize the support of over 53 other countries for the Venezuelan people to take back their country."

Freeland confirmed that she and Pompeo had discussed the Venezuelan crisis in Thursday's meeting. "Canada recognises Juan Guaido as the interim president of Venezuela and it is clear to us that Maduro and his regime are illegitimate," Freeland said, adding that Ottawa has enacted "very strong sanctions" against Caracas.

'Regulating the Conflict With the US Empire'

Earlier this week, Maduro confirmed that members of his administration has been in contact with representatives of the US government "for several months," and that the talks were aimed at regulating the conflict "with the US empire." The Venezuelan leader's statement followed comments by President Donald Trump on Tuesday that the White House was "talking to various representatives of Venezuela," and that the talks were "at a very high level."

On Wednesday, the Wall Street Journal reported, citing unnamed officials, that the Trump administration has been 'secretly' talking with senior Maduro aides, including National Constituent Assembly head Diosdado Cabello, who is allegedly looking for guarantees that he and other senior officials can remain in politics in Venezuela and have sanctions against them lifted if Maduro is removed from office. The Trump administration and Venezuelan officials have yet to comment on the WSJ story.

Last week, Trump national security advisor John Bolton reiterated US support for Guaido, accusing Maduro of "ruining" the country's economy and saying it was the US's desire "to see [a] peaceful transfer of power and have really true free elections." Maduro, meanwhile, accused Donald Trump and his administration of treating the Venezuelan people like Hitler treated the Jews.

The US and its Canadian, European and Latin American allies expressed support for former opposition lawmaker Juan Guaido after he proclaimed himself interim president in January, two weeks after Nicolas Maduro was inaugurated for a second term. The US and its allies have placed tough sanctions on Venezuela and its oil industry, freezing Venezuelan assets abroad and diverting funds from Venezuelan oil giant PDVSA located abroad to Guaido and his allies. Caracas has accused Guaido and his Western allies of a coup plot against the democratically-elected government, and claimed that the US's ultimate goal is to gain access to Venezuela's vast mineral and oil wealth.