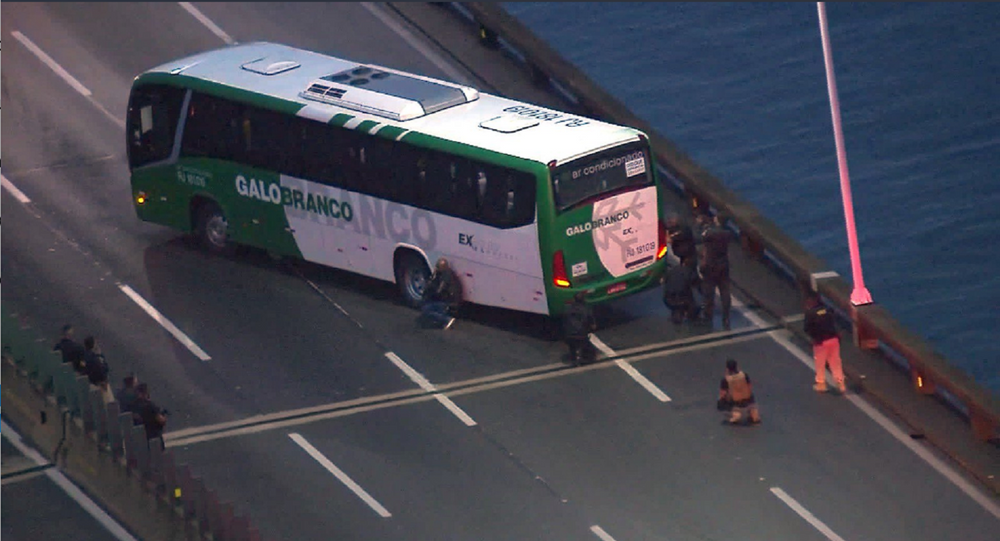 The incident took place at the Rio-Niterói Bridge, which connects the cities of Rio de Janeiro and Niterói. There were no immediate details as to how many people are on the bus.

Military police reported on their Twitter page that a sniper had “neutralised” the suspect, who earlier in the day took 37 people hostage on the Rio-Niterói Bridge. The police added that “all the hostages were released unharmed".

While initial reports suggested that the man was armed, the police later confirmed in an interview with Good Morning Rio that he in fact only had a toy gun.​

Earlier, a masked man, suspected of being a military police officer, has seized a bus in Brazil with 37 passengers onboard on the Rio-Niterói Bridge.

According to initial reports, the hostage-taking was reported to have taken place at 5:30 am on Tuesday, when a masked person threw a burning object out of the vehicle. The seemingly disoriented hijacker reportedly identified himself as a military policeman, ordered the driver to pull over and then cross the bridge to Rio. However, the man has released four people.

Federal Road Traffic Police and Military Police have been dispatched to the scene.

The road police have shut down traffic over the bridge to Rio.

The exact number of people on the bus and the man's motives are not immediately clear.

"A man who identified himself as a military policeman stopped a Galo Branco bus on the Rio-Niterói Bridge. He is threatening to set the bus on fire, putting passengers at risk. We are in negotiations with him to free more hostages; we don't know what his real motive is", according to Sheila Sena, a spokeswoman for the Federal Road Police.

In order to carry out the negotiations, a cell phone needs to be taken from inside the bus and given to the police. The operation is being conducted by negotiators with the Special Operations Battalion.

"Our main mission is to take the hostages out of the vehicle and go back to our lives", said Mauro Fliess, spokesman for the military police.

A hypothesis that the abduction was premeditated has not been ruled out by the military police, according to Fliess.