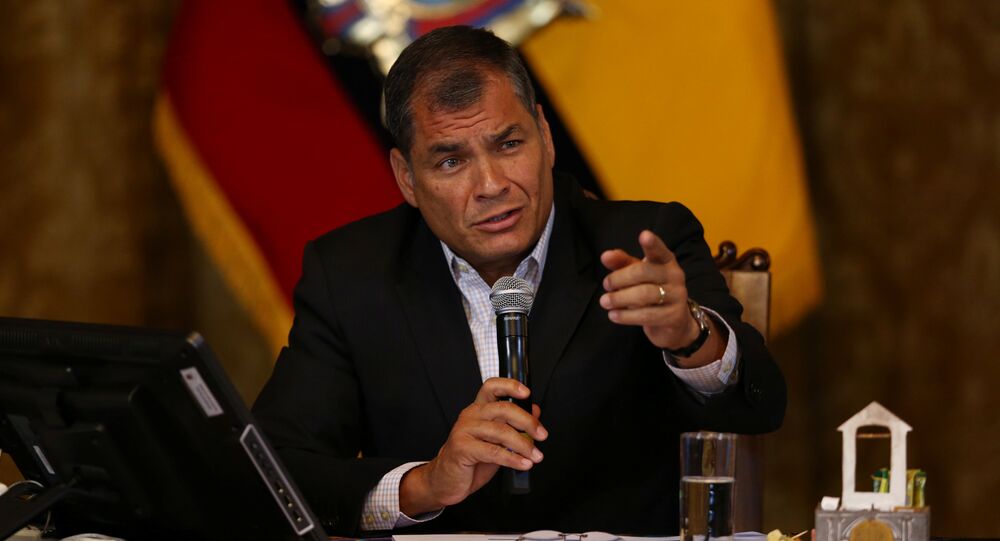 MOSCOW (Sputnik) - Ecuador's National Court of Justice has ordered pre-trial detention for former president Rafael Correa, who served as the country's president from 2007-2017 over an alleged corruption scheme, a statement from the country's prosecutor said.

"The judge of the National Court of Justice, Daniella Camacho, accepted the measures requested by the Prosecutor's Office and issued pre-trial detention for former President Rafael C.", the statement said.

Former vice president Jorge Glas and several other high-ranking officials are also on the detention list.

According to the prosecution, the former head of state is involved in the bribery and corruption case in the largest political party in Ecuador, PAIS Alliance, which he founded. The prosecutor's office says that he refuses to cooperate with the investigation.

In response, Correa stated that the case was launched in order to prevent him from participating in the upcoming elections.

"The judicial proceedings against me are intended to prevent me from returning to the country and prevent my possible participation in the [2021] elections. They know that the polls show that we are doing very well. Do not underestimate hate. Some people live only for the sake of hate and I believe that this feeling is stronger than love. Some people live to hate me", he said.

The ex-president is currently outside Ecuador. November 2018, the media reported that Correa allegedly requested asylum from Belgium, where he lived with his family, but the politician denied this information.

© AFP 2021 / JOHN THYS
Former Ecuadorian President Rafael Correa attends to a meeting on power and checks and balance at the national theater in Brussels on October 22, 2018

In the meantime, Correa called the request of the country's prosecutor for his pre-trial detention merely a political show in an interview with Sputnik. He added that the case would not prevent him from continuing his career in Ecuador in the future.

It's a Lie, We Never Knew of Interference and Would Never Allow It - Ex-Ecuadorian President Correa

Ex-Ecuadorian President Correa Banned From Facebook After Posts About Corruption