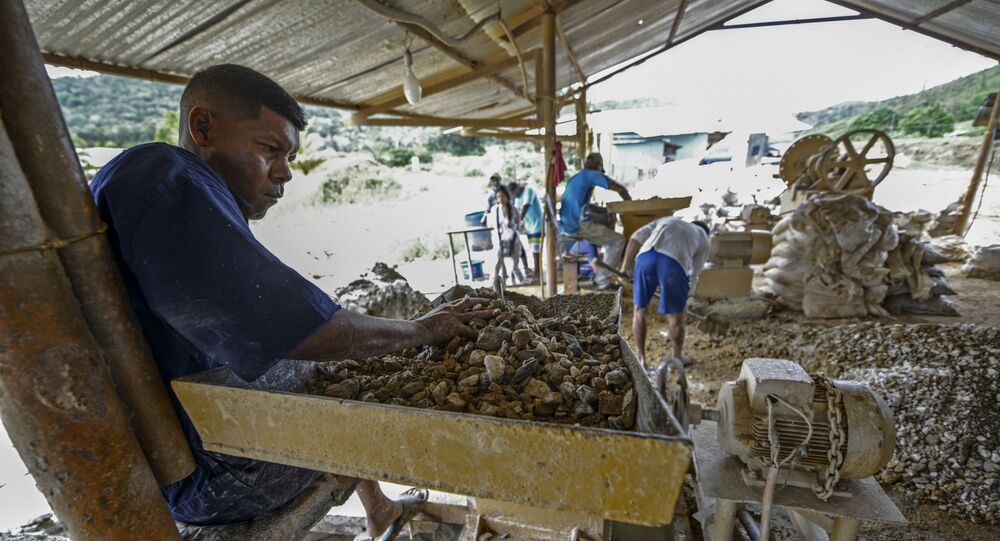 The residents of Venezuela's El Callao municipality, nestled in the Orinoco Mining Arc (Arco Minero del Orinoco), are all either miners or live off the trade generated from gold flows.

"It rains here and gold is almost on the sidewalks," says Miguel Rivas, one of El Callao residents.

The Orinoco Mining Arc is a territory of 111,843 square kilometers delimited by the Government, which comprises the states of Apure (southwest), Amazonas (south), Delta Amacuro (northeast) and Bolívar (south), to which El Callao belongs.

30 minutes away from the community you can see miners walking along the road or in trucks with some cone-shaped wooden tools and trays, which they use to wash the gold.

Upon arriving at El Callao, the visitor feels like at a market. "I buy gold!" "I sell gold!" this is what you hear in the streets; and you can often see men, women and children walking with their trays and wearing headlamps.

"Almost everyone works in the mines, so here you see people knee-deep in mud; you will never see people wearing clean clothes here," Rivas added. He worked in a mine 17 years ago, but he caught malaria and decided to leave.

"In El Callao, malaria is like the flu or dengue, which occurs frequently here," Richard, one of the sector’s residents who preferred to identify himself with that name, said.

The Government recently delivered medicines to those affected, as well as mosquito nets for the beds of children and adults.

"We received several mosquito nets a week ago, and we already know that mosquito vectors have their hours – at 6 am (10:00 GMT) and at 6 pm (22:00 GMT). At that time, one has to throw something to scare away the mosquitoes," Mariana Gutierrez, who has a food business near a mine in the area, said.

When there are no special drugs in hospitals, many choose to drink concoctions of medicinal plants, water with baking soda and lemon to fight the virus.

"In case of complications, in some cases people are forced to pay up to four grammes of gold ($120, taking into account that each gram equals $ 30, according to the 5 August price), to get the drug on the black market, although its distribution is free," the woman pointed out.

The World Health Organisation (WHO) highlights that malaria causes an acute febrile condition that, if not treated in the first 24 hours, can lead to death.

Venezuela is one of the countries that have experienced the greatest increase in malaria cases.

According to the WHO, in 2017, 406 thousand cases were recorded, representing a 69% increase compared to the previous year.

The gold rush revived in southern Venezuela due to two factors – the economic crisis the country’s been facing since 2015, and the government’s commitment to mining in the face of the fall in oil production. At one point, 90% of the national income was derived from the sale of hydrocarbons.

Many residents of the centre and west of the country move south in search for money.

"This is like an illusion – you come to do everything to get gold, you get two grams a day ($60), which is something that almost no one in the country can earn; this money is barely enough, since those who control the mines take 50% of it, and the other part goes to the military. All that remains is to pay for the hotel, buy food and send something to the family," a 19-year-old young man who returned from work at the Nacupay mine, said.

The minimum wage in Venezuela doesn’t exceed $3 per day.

There is military control at the gateway to the community. On 4 August there were eight motorcyclists wearing camouflaged clothes. They carried long guns and their faces were covered with black cloth; there was no visible identification.

To the left of El Callao, there’s the Nacupay mine, also known as Dubái.

Everyone opens their eyes wide as a sign of danger when this mine is mentioned, because there, as in all the El Callao mines, criminal gangs control the areas where the precious metal is.

In recent months, Nacupay has had a bloody reputation.

Whoever hides gold somewhere in their body to avoid paying the members of "la base" (the generic name that the villagers give to these gangs), may appear beheaded, dismembered, mutilated or burned, depending on how their alleged fault is qualified.

This criminal practise is repeated in other mines, all named after countries – Peru, Argentina, the Philippines, Mexico, and so on.

That explains why local people are afraid to talk to the press about the life of the mines.

"The thing is that "la base" members are always around; and if they see us talking [to the press] they might think that it’s someone from police intelligence because the police have tried to pacify the mines, which has resulted in a confrontation,” the young man said.

A Sputnik correspondent only managed to visit the streets of El Callao and the mills of one of the mines. Going down to the places where gold is extracted was an impossible task, given the refusal of "las bases."

The miners with their bags arrive in trucks at makeshift mills to process the sand or grind the stones that are then mixed with water and, through pipelines, fall on a previously prepared plate with mercury, which precipitates and joins the particles of gold.

When they are done with the sand, the miners carefully clean the plate and form a very thin sandy row, which is gold. Then this sand is placed on a cotton cloth and squeezed to remove the mercury. Gold is burned to be pure, and after that, it is weighed by the mill owner.

"Half of what comes out is for the mills; if you have 10 grammes you have to give them five, and the mill keeps the sand, which is then studied and sold. Depending on that, you get paid according to the amount of gold you have," the young miner explained.

Miners who are not from El Callao or the nearby villages end up trapped in this town, where all basic services are poor and where most of the homes are made of wood and have aluminium roofs.

The gold they earn is usually spent in local stores – to buy some water or a pair of shoes.

"I am from Barinas (west), I’ve been working in the mines for three years. This life is a trap – every day I get one or two grammes, but I spend much more. For example, a kilo of spaghetti is 0.60 cents; I pay about $9 dollars to rent a tent. And then you realise you have no real money," Patricia, one of the women who work in the mines, said.

For several weeks Patricia has been paying a lot for water because cases of hepatitis have increased.

"The water here is not good and, no matter how much it’s filtered or boiled, it’s still contaminated; and many got hepatitis from that water," she said.

Most of the residents of the area avoided cameras to remain unidentified. Those in charge of controlling the area insisted that the shooting should be stopped.

"That’s the life near the mine, leave now," Rosa said, visibly nervous. As she explained, after about 20 minutes of photographs and interviews, the team had to leave because something bothered "la base" members.

In June, Venezuelan President Nicolás Maduro said that the country ranks sixth in the world in terms of gold reserves, adding that it aspired to certify them, relying on the exploitation of the metal to overcome the economic crisis and confront the US sanctions.