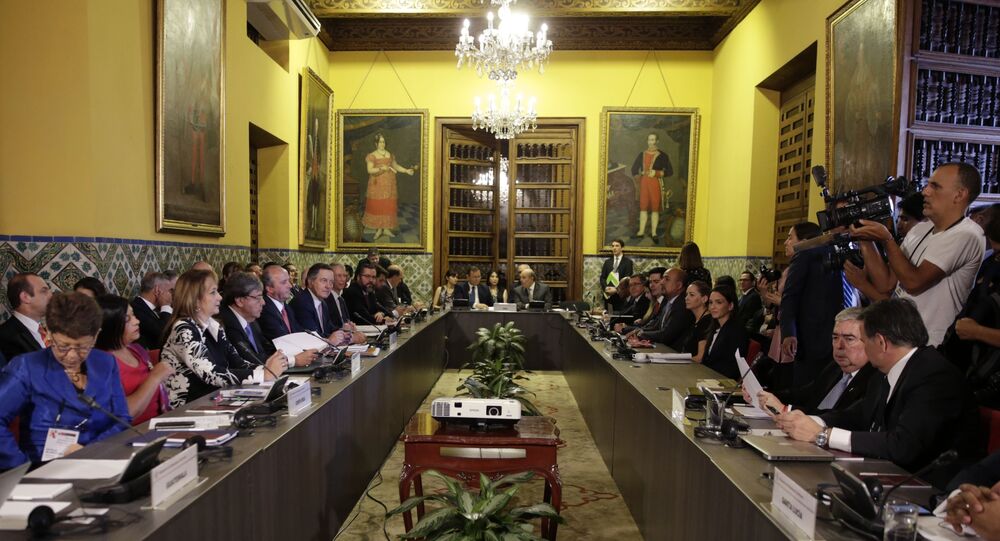 MEXICO CITY (Sputnik) – Russia, among other countries, has been invited to visit an international meeting on democracy in Venezuela, which will be held in Lima on 6 August, Peruvian Foreign Minister Nestor Popolizio said.

"It will be a rather broad meeting. We are inviting all the countries that might be helpful for what we call restoring democracy in Venezuela. We are inviting Cuba, China, Russia, Turkey, Uruguay and Bolivia," Popolizio told a press conference in Lima on Wednesday, as aired on YouTube.

The meeting would be dedicated to better ways of "restoring democracy" in Venezuela, Popolizio suggested.

"Both the Lima Group and the International Contact Group believe that it is important to hold free and fair elections in Venezuela. We should also study the humanitarian crisis in the country, its regional and global influence and the ways we can help [cope with it]," the diplomat noted.

Venezuela has been struggling to overcome an economic crisis for many years. The situation in the country was exacerbated in January when anti-government protests fueled by opposition leader Juan Guaido’s move to proclaim himself the country’s interim president, erupted.

President Nicolas Maduro slammed Guaido, saying that he acted at the orders of the United States, which sought to install the latter as the country’s president and get hold of Venezuela’s vast oil and gas assets.

Maduro is recognized as the leader of Venezuela by Russia, China, Turkey and a number of other countries. The US and its allies recognize Guaido as the Venezuelan president.