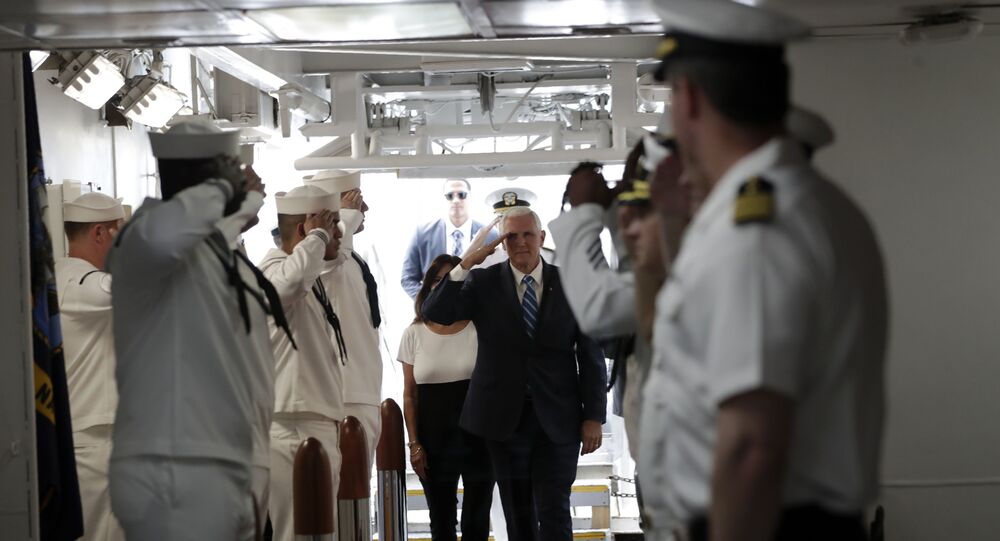 On 18 June, the US vice president toured the USNS Comfort, scheduled to depart on Wednesday for Latin America and the Caribbean on a five-month mission to address a 'humanitarian crisis' in Venezuela. Pence announced that the ship would bring “dozens of X-ray machines, and much more.”

During a press conference at Port Miami, where the USNS Comfort is docked, Pence called on Venezuela's legitimate president, Nicolas Maduro to “go,” accusing him of being “a dictator with no legitimate claim to power,” according to a Miami Herald report.

When asked about the long-discussed option for military intervention, the vice president responded in a familiar manner, reiterating that “all options are on the table,” the Miami Herald reported Tuesday.

In a separate statement on Twitter, Pence claimed that during Maduro’s tenure as Venezuelan president, “crime, violence, and lawlessness have spread like a virus leaving Venezuelans across the country suffering beyond measure.” He also noted that he and US President Donald Trump continue to support the self-proclaimed interim president, Juan Guaido.

Under Maduro, crime, violence, and lawlessness have spread like a virus leaving Venezuelans across the country suffering beyond measure.

President Trump and I stand with interim President @jguaido and support the Venezuelan people in their fight for freedom! pic.twitter.com/O5dAXNxKx8

In a statement, Guaido applauded Pence and Trump for their “strong and consistent support” in making Venezuela “free.”

During the news conference at Miami Port, Guaido’s envoy to the US, Carlos Vecchio, as well as US Secretary of Health and Human Services Alec Azar and Adm. Craig Faller, commander of the US Southern Command, discussed with local officials, military personnel and Venezuelan-Americans the Comfort’s mission, the Miami Herald report noted.

US National Security Adviser John Bolton praised the USNS Comfort mission for “their dedication as they deploy today to provide care for the people of Venezuela and our partners throughout Latin America and the Caribbean.”

Bolton pledged that the US would “continue to stand firmly in support of ending Maduro’s repression,” while accusing Maduro of “failed policies, inability to govern, and corruption.”

Maduro’s failed policies, inability to govern, and corruption have devastated Venezuela’s economy and forced millions to flee the country. The United States will continue to stand firmly in support of ending Maduro’s repression.

Earlier, Bolton accused Venezuelan President Nicolas Maduro of paying Moscow $209 million to secure its "continued support" – an allegation dismissed by Russia, with Russian Ambassador to Venezuela Vladimir Zaemsky pointing out that the Russian president has confirmed the absence of new contracts with the Latin American nation.

The USNS Comfort is slated to leave Miami for Latin America and the Caribbean on Wednesday for a five-month trip, reportedly carrying around 950 crew members and medical personnel on board, equipped with a blood bank, intensive care units and operating rooms, according to the Miami Herald.

The situation in Venezuela has been intense since January when Guaido proclaimed himself the interim president. The US, Canada, some Latin American and European nations were quick to recognize Guaido as the new leader of Venezuela and have supported him in his attempts to oust Maduro from power.

Guaido's attempts to sway the Venezuelan Armed Forces to take his side, including a 30 April coup attempt, have not succeeded. Maduro's government accuses the opposition of staging numerous attacks on the Venezuelan infrastructure which has led to massive blackouts and left civilians without food, water and medical care.

Russia, China, Turkey and a number of other nations recognize Maduro as the country's legitimate leader, while urging outside actors to avoid interfering in Venezuela's internal affairs.