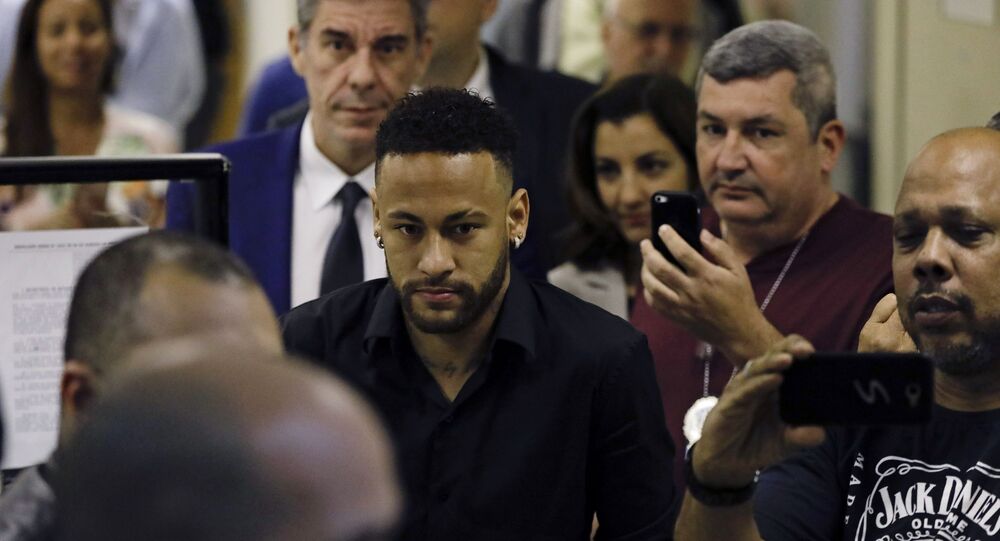 Paris Saint-Germain (PSG) star Neymar has denied any wrongdoing despite the Brazilian model accusing him of rape, as the third lawyer representing Najila Trindade, the apparent victim, has dropped the case without explanation.

Sao Paulo police have filed a "slander" complaint against the Brazilian model who accused Paris Saint-Germain forward Neymar of rape, official sources said on Wednesday. The complaint against model Najila Trindade was filed after Commissioner José Fernando Bessa considered the accusations made by the young woman in a TV interview to be “slanderous”.

The model was quick to slam the police as “bought” off, as officers started questioning her ex-husband, Estivens Alves, about her general character.

“The police are bought aren't they? Or am I crazy?” the affronted Trindade told Brazilian TV as cited by the Mail Online.

The corruption accusation has been brushed off by police sources involved in the case, who have gone on record vowing to investigate the model’s allegations against the football star thoroughly and treat him just like any other suspect.

Earlier, the model filed her rape claim with police in Sao Paolo, as she dropped the bombshell accusation against Neymar, claiming he assaulted her on 15 May after they connected on social media.

The model claimed the couple met up in Paris with Neymar paying for her plane ticket to France and a hotel room. “It was a sexual intent, my wish, it was clear to him,” she told Brazilian television network SBT.

According to Mendes, the footballer became violent after she asked him to put on a condom. It was “aggression together with rape,” she said.

The Paris Saint Germain striker confirmed having two encounters with his accuser, while vehemently denying any wrongdoing.

© Sputnik / Maria Plotnikova
Alleged VIDEO of Neymar's Rape Accuser Hitting Footballer Leaked Online
The football star took to social media to strongly deny Trindade's allegations against him, sharing what appeared to be their private exchange on WhatsApp before their Paris encounter, including nude photos which Trindade apparently sent to entice him to meet her.

Following the publication of those images and messages, which were deleted both by Instagram and Facebook over policy violations, Neymar is now facing a police probe in Brazil for releasing the woman’s intimate photos without her consent.

The rights holder of Neymar's name and image, NR Sports, said no sponsorship contracts had been cancelled, though some campaigns were suspended, as Nike voiced its concerns earlier in the week over the rape accusation.

Neymar, one of football's biggest names, has enjoyed considerable backing from Brazilians in the wake of the accusations, with 60% of believing he is innocent, according to polls.