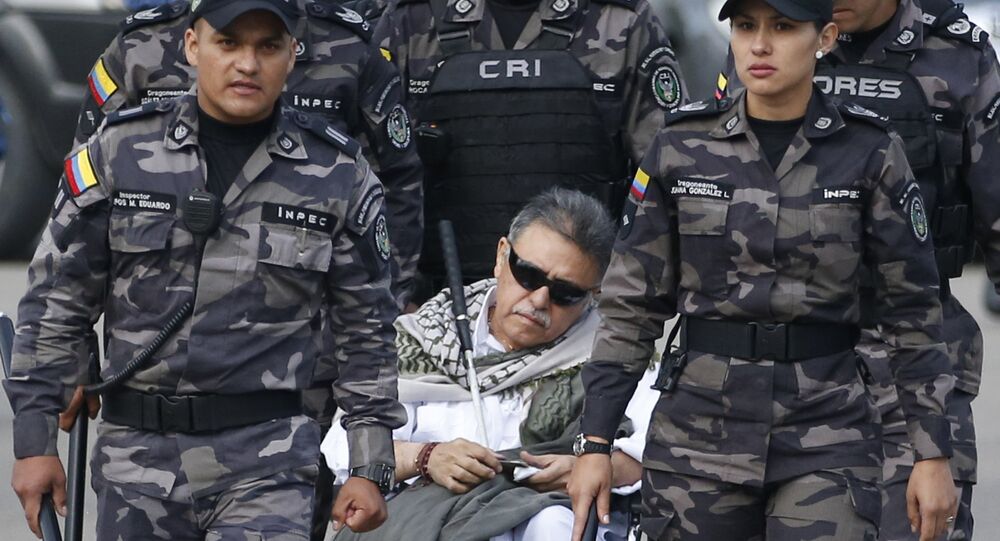 Freedom lasted seconds for the former commander of the Southern Bloc of the Revolutionary Armed Forces of Colombia (FARC), who exited a Colombian prison Friday, only to re-enter shortly after new evidence was linked to his original charges of conspiracy to traffic tons of cocaine to the US.

Former FARC commander and member of the Secretariat Seauxis Paucias Hernández, more commonly known as "Jesús Santrich," was immediately recaptured outside La Picota prison in Bogotá, Colombia, minutes after being escorted outside the jail walls in a wheelchair.

Breaking: FARC leader Jesús Santrich has ben arrested upon exiting prison and returned to the detention center after being freed for just 2 minutes, following 13 months of incarceration. He is in poor health. Supporters are outraged. @PartidoFARC @PortellateleSUR pic.twitter.com/r4l5jCpn85

"As a result of international judicial cooperation, in the last few hours new evidence and elements have been incorporated that clearly account for the circumstances of time, manner and place of alleged conspiracy to conduct drug trafficking," reads a statement from the attorney general's office, translated by Reuters.

The 52-year-old, who is legally blind and reportedly in poor health, was arrested in April 2018 on charges alleging conspiracy to ship some 10 tons of cocaine to the US in conjunction with Mexico's Sinaloa Cartel.

The order to release Santrich and deny his extradition to the US following a Wednesday special tribunal by the Special Jurisdiction for Peace (JEP) triggered the resignation of Colombia's top two prosecutors, including the attorney general.

"This challenge to judicial order will not be endorsed by the undersigned. My conscience and my devotion to the rule of law prohibit it," Attorney General Néstor Humberto Martinez told journalists Wednesday. "For that reason I have presented my irrevocable resignation."

Some 139 former FARC guerrillas have been killed since the 2016 peace process between the Colombian government and FARC-affiliated individuals, according to Reuters. The outlet also notes FARC has voiced concerns over targeted killings and assassinations by the hands of "right-wing gangs or drug traffickers."

Over 130 kg of Cocaine Washed Up on Romanian Coast - Reports