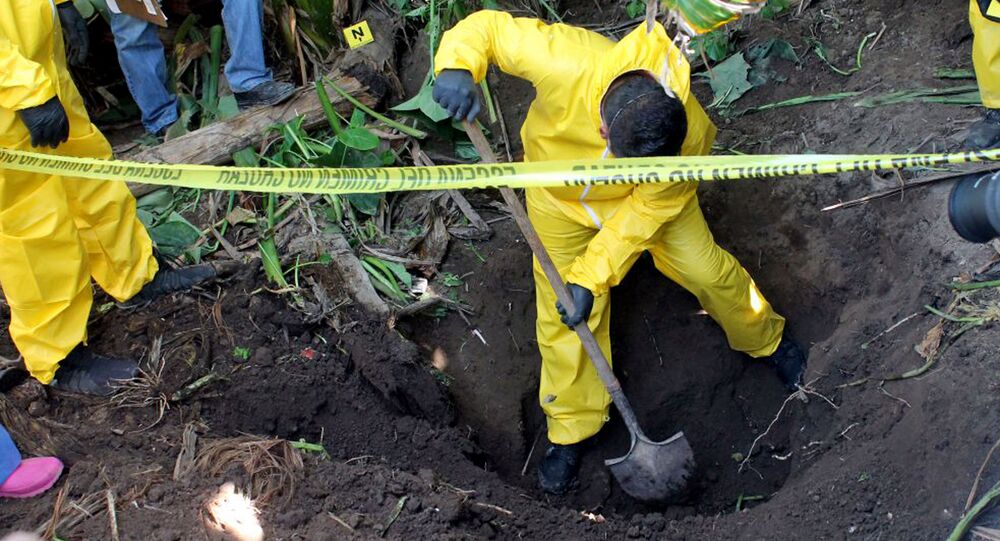 Remains of 35 People Discovered in Anonymous Graves in Mexico - Officials

MEXICO CITY (Sputnik) - Bodies of a total of 35 people were found in three unmarked graves in the Mexican state of Jalisco, State Prosecutor Gerardo Octavio Solis said on Saturday.

Most of the bodies were found at a ranch in the municipality of Sapopan, the prosecutor noted. "There were 27 bodies found, it appears these people had been deprived of their freedom. So far only two people have been identified", Solis said as quoted by El Universal portal.

According to the prosecutor, experts continue to work at the ranch, so it is possible they may discover additional bodies.

The remains of seven people were found in one house in Guadalajara, and the remains of another person in the municipality of Tlajomulco de Zuniga, the prosecutor said.

© AFP 2021 / Pedro PARDO
Mexico Creates Civilian-Led National Guard Amid Fight Against Crime, Drug Trafficking
Over recent years, Mexico has been facing high crime rates as a result of the activities of drug cartels in the country and violence between them. According to official figures, over 31,000 people were killed in the violence in 2017.

In early February, the country's Deputy Interior Minister Alejandro Encinas said about 40,000 people were missing in the country. He estimated the number of secret burial places at 1,100, and the number of unidentified corpses in morgues at 26,000.

Bloodshed has reportedly gripped Mexico in recent years after turf wars began between local drug cartels for the control of the existing infrastructure, most importantly cocaine transit passes to the United States.