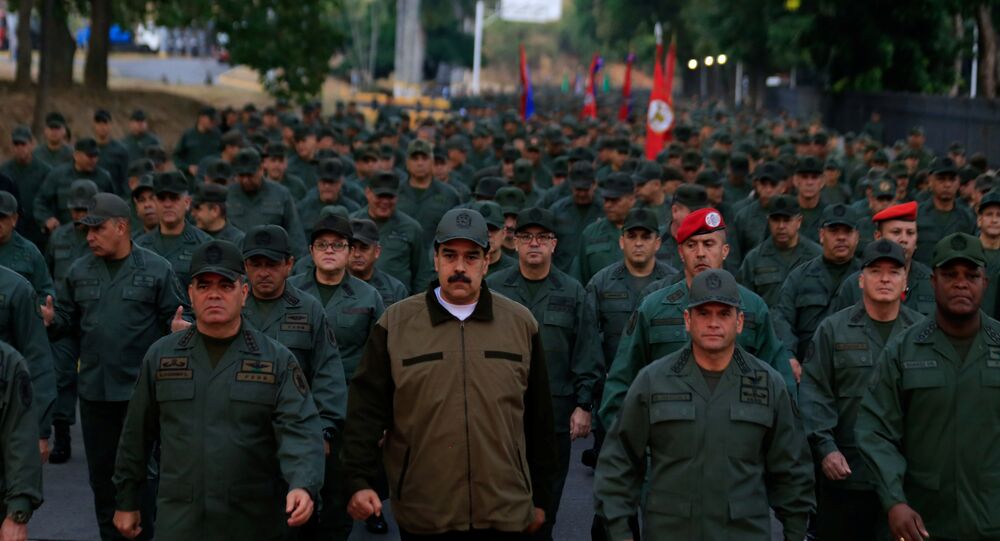 MEXICO CITY (Sputnik) — Venezuelan President Nicolas Maduro signed a decree either reducing in rank or expelling dozens of officers, including high-ranking ones, from the country's armed forces due to their involvement in a recent coup attempt, local media reported.

Lt. Col. Ilich Sanchez of the Venezuelan National Guard, who in recent months led the security services of the opposition-controlled National Assembly, is among those expelled.

Large-scale protests against Maduro began in Venezuela on 21 January soon after he was sworn in for a new term. Guaido proclaimed himself an interim leader of the country. A number of Western countries, including the United States, backed his claim.

© AP Photo / Miraflores Press Office / Jhonn Zerpa
US to Increase Pressure on Venezuela, May Try to Kill Maduro – Ex-UN Rapporteur
Maduro, in turn, has accused the United States of trying to orchestrate a coup in order to install Guaido as its puppet. Russia, China, and a number of other countries have voiced their support for Maduro as the only legitimate president of Venezuela.

In response, Maduro said that the commanders of all regions and zones of integral defence had reiterated their full loyalty to the people, constitution and homeland. The coup attempt turned violent and resulted in some 240 people being injured, according to the Office of the UN High Commissioner for Human Rights.