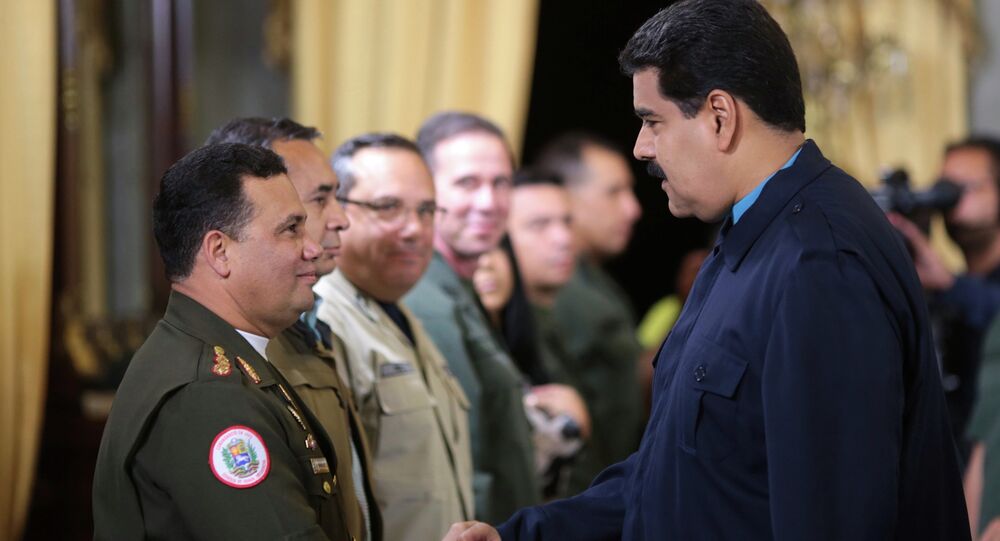 Earlier, National Security Adviser John Bolton publicly called on senior Venezuelan generals to make good on commitments they supposedly made to support the opposition in its push to overthrow the Maduro government.

In May 2017, the Trump administration rejected a visa request by General Ivan Hernandez, the head of Venezuelan military counterintelligence and commander of the presidential guard, to send his 3-year-old son to the United States for brain surgery, two people familiar with the internal discussions, including a former US official, have told AP.

According to the news agency, the "missed opportunity," presumably to use Hernandez's family as collateral, was one of several botched chances to "curry favour with Venezuela's normally impenetrable armed forces."

Another of these alleged attempts to curry favour was an attempt create a back channel with Defence Minister Vladimir Padrino Lopez, who allegedly sought to make contact with the US Defence Intelligence Agency through an intermediary in early 2016, only to be rebuffed by Washington after Diosdado Cabello, leader of Venezuela's ruling Socialist Party, made a television address accusing the Venezuelans abroad who had brokered the creation of the back channel of working with the US to carry out a coup.

© REUTERS / Handout / Miraflores Palace
Maduro Calls on Army to be Ready to Defend Venezuela From US Attack − Report
One of AP's sources said that contacts with the Venezuelan defence minister were cut off amid fears that he may have simply been feigning an interest in cooperation to try to collect information for Caracas about the extent of US plans.

On Tuesday, the same day that opposition leader Juan Guaido announced the beginning of the "final phase" of the opposition's push to overthrow the government and called on the military to support the plot, Secretary of State Bolton gave a speech at the White House, calling on generals Padrino and Hernandez, as well as Supreme Court Chief Justice Maikel Moreno, to fulfill promises they supposedly made to the opposition to ensure a transition of power.

A day later, after it became evident that the "final phase" had failed, a source in the US National Security Council told Spanish daily ABC that Lopez, who had supposedly reached a deal with Guaido and the US to support the coup, had a change of heart at the last minute. According to ABC, the White House wasn't immediately aware of what happened on Tuesday, with some believing that the coup was derailed by Padrino.

On Friday, unnamed sources told CNN that President Trump had begun to question the credibility and interpretation of Washington's intelligence about Venezuela and its leadership in light of recent events in the Latin American country, attributing his scepticism to the failure of senior members of Maduro's inner circle to defect as planned.

Also Friday, Venezuelan Prosecutor General Tarek William Saab said his office had requested 18 arrest warrants to be issued in connection with Tuesday's coup attempt. According to Saab, opposition politician Leopoldo Lopez, who escaped house arrest earlier this week and took shelter at the Spanish ambassador's residence in Caracas, was one of the figures behind the coup attempt.

Venezuela has faced serious political unrest since January, when Guaido proclaimed himself the country's interim president.

Trump ‘Asking Questions on Reliability’ of US Intel on Venezuela – Report