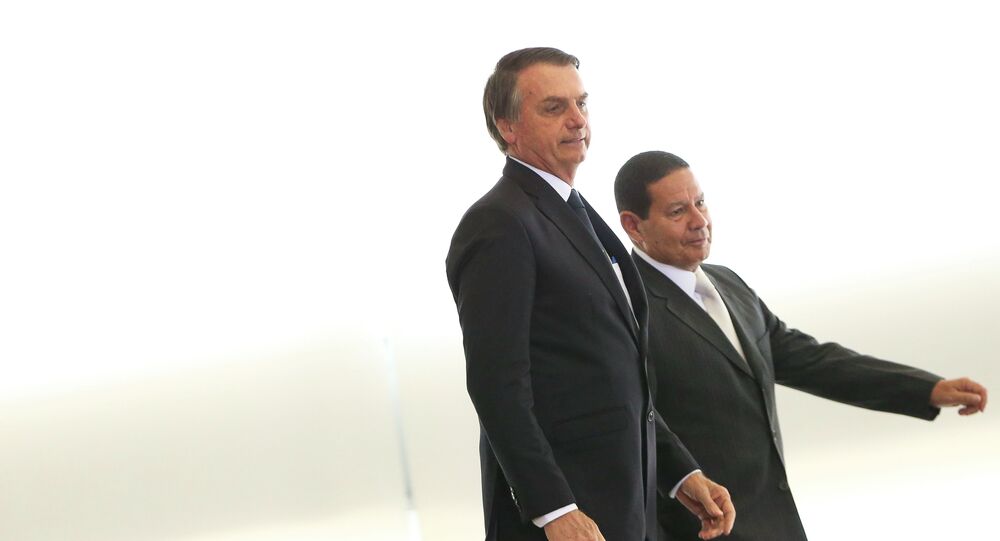 Brazilian Vice President Hamilton Mourao has criticised the Venezuelan opposition's failed efforts this week to convince the country's military to break with President Nicolas Maduro and join its uprising, saying that the move may have been premature.

Speaking to reporters, Mourao said that he did not know "whether [Guaido] was afraid of being arrested or if some elements of the Armed Forces had promised some support," but "looking at it now, we think it was not the best [decision]."

In separate interview with Radio Gaucha, Mourao, a retired army general who has spent time in Venezuela as a military attaché, said that while cracks did appear to exist among the lower ranks in the Venezuelan military in terms of loyalty to Maduro, the commanders appeared unaffected, with Brasilia now left "in a position of expectation" regarding the situation in Venezuela.

"We don't see light at the end of the tunnel for Venezuela," the vice president said, stressing that Brasilia was now worried that the ongoing crisis could turn into a civil war scenario. "From the outset, the government has been concerned that this conflict would degenerate into a civil war. This would be the worst possible outcome," he said.

Mourao's sentiments appear to stand at odds with views expressed by President Jair Bolsonaro, who said Wednesday that the failed Tuesday uprising was not a defeat, and that Brazil has information regarding "factures" in the Venezuelan military hierarchy. Bolsonaro urged other nations to join Brasilia in supporting Guaido's continued attempts to oust Maduro.

Mourao has previously offered public support for the attempt to topple the Venezuelan government earlier this year. In February, he hinted at the need for foreign intervention, saying that Venezuela could not "free itself from the Chavista regime on its own." Mourao has also consistently emphasised however that Brazil would not allow the US to use its territory for any possible intervention in Venezuela, and indicated early on that Brasilia would not take part in any such operation itself.

© REUTERS
US Considers Backing Guaido's Venezuelan Opposition With ‘Influx of Cash’ – Report
Guaido announced the start of a "final phase" in the "Operation Freedom" campaign to oust the Maduro government earlier this week and urged the military to join the opposition. The call to action led to street violence in the capital, with at least 70 injuries reported. The next day, President Maduro announced that he had appointed prosecutors to investigate what he and other officials said was a failed attempted coup.

Guaido proclaimed himself 'interim president' in late January, two weeks after Maduro was inaugurated for a second term in office following elections last May. The US and its Latin American and European allies immediately recognised Guaido as Venezuela's legitimate president, with other countries, including Russia, China, Bolivia, Cuba, Nicaragua and others refusing to do so.