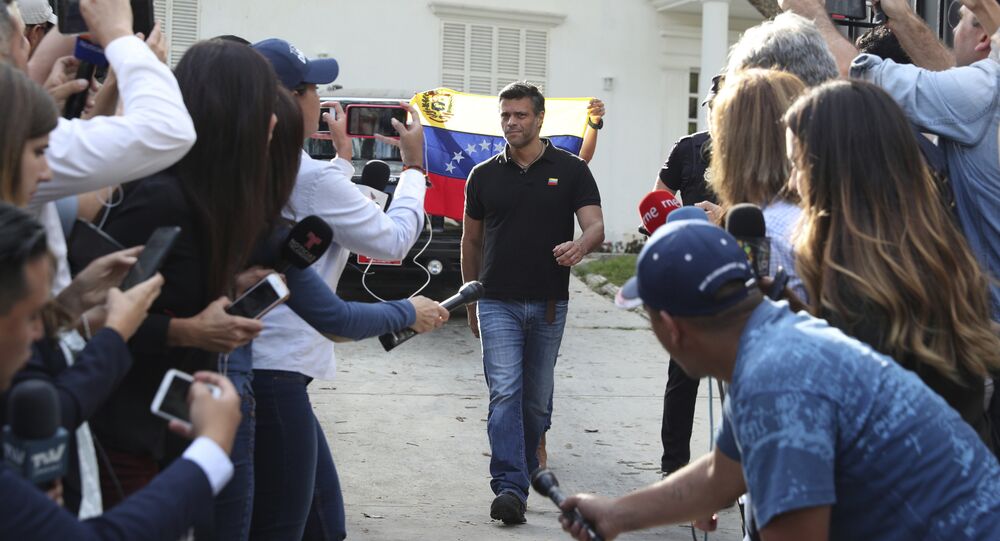 Venezuelan opposition politician Leopoldo Lopez, who had been under house arrest for two years, had recently taken refuge in the residence of the Spanish ambassador in Caracas. He spoke to reporters at the gate of the residence about the opposition's efforts to topple President Nicolas Maduro, much to the outrage of Venezuelan authorities.

Spain's foreign minister, Josep Borrell, vowed on Friday that his country would not allow its embassy in the capital of Venezuela to become a centre for political activity for opposition leader Leopoldo Lopez.

"Spain will not permit its embassy to be converted into a centre for the political activity of Mr. Lopez, or anyone else," Borrell told reporters during a visit to Beirut, Lebanon.

The minister had earlier confirmed that Lopez, who took refuge in the embassy after fleeing house arrest, had not applied for asylum in Spain.

Venezuela's envoy in Madrid, Mario Isea, has lashed out at Spain for permitting Lopez to abet the recent botched military uprising, led by the opposition leader Juan Guaido, from the ambassador's residence.

The Spanish government said it was not going to hand Lopez over to Venezuelan authorities, in defiance of the arrest warrant issued for him by Nicolas Maduro's government.

The order followed the Tuesday coup attempt orchestrated by the Venezuelan opposition. The authorities believe Lopez to be one of the key figures behind the failed government overthrow.

Lopez was sentenced to 14 years in prison for his role in the violent 2014 anti-government protests, which claimed the lives of over 40 people. He was put under house arrest in 2017 but escaped on Tuesday amid the Juan Guaido-led coup attempt. The activist was caught on camera standing at a military base alongside the opposition leader, calling on the armed forces and civilians to join the protesters in their bid to oust Maduro.

It appeared that Guaido was backed only by a small group of military officers, while top defence officials endorsed President Maduro.