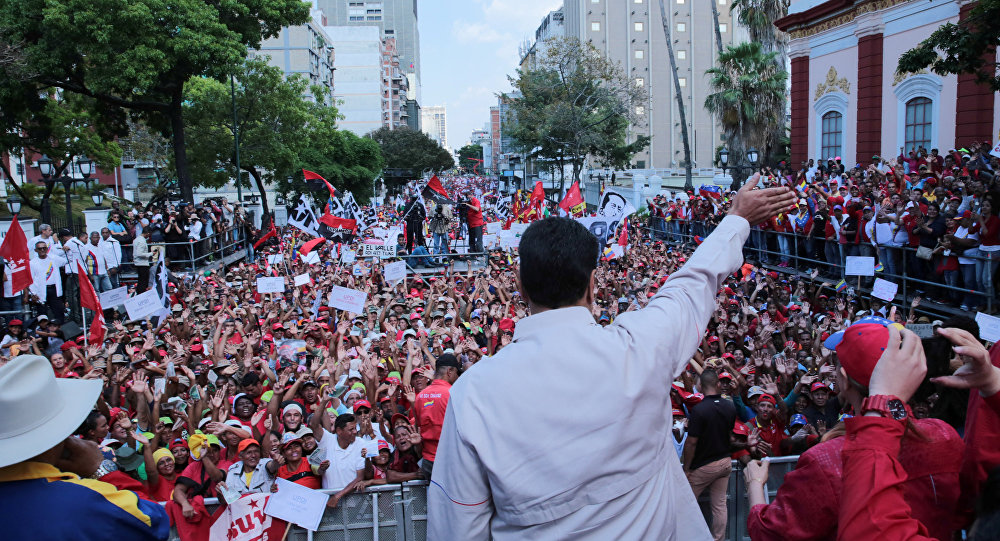 Violent clashes between pro-Guaido protesters and government security forces started a day earlier after Venezuelan opposition leader Juan Guaido, who proclaimed himself "interim president" of the country earlier this year, called on Venezuela's civilians and the military to act against the government.

US Secretary of State Mike Pompeo has stated that military action in Venezuela is possible "if that's what's required", but he would prefer a peaceful transition, Fox business has reported.

"Military action is possible. If that's what's required, that's what the United States will do", he stressed.

The statement comes after Pompeo earlier told CNN that Maduro was ready to leave his country for Havana earlier in the day in light of the attempted coup, but was convinced by Moscow to stay in Venezuela.

Later Wednesday, Trump National Security Advisor John Bolton told CNN that Pompeo planned to discuss the situation in Venezuela with Russian Foreign Minister Sergei Lavrov later in the day. "Secretary Pompeo will be addressing his counterpart," Bolton said. "We have a lot of conversations with the Russians," he added.

© Sputnik /
EU Unlikely to Support Military Intervention in Venezuela - Ambassador
Venezuelan President Nicolas Maduro himself slammed Pompeo's claim, branding it a lie and manipulation. Venezuelan Foreign Minister Jorge Arreaza, for his part, said that "fake news was a very sad way to acknowledge that a coup supported by the United States failed".

Guaido and his supporters made another attempt to depose Maduro on 30 April, gathering in Caracas on a highway in front of the La Carlota military base. Guaido called on the people of Venezuela and the army to take to the streets to complete the operation to overthrow Venezuela's legitimate president.

READ MORE: Moscow: US Claim That Russia Convinced Maduro Not to Flee Part of 'Info War'

© Sputnik / Maksim Blinov
FAA Prohibits US Air Operators from Flying Below 26,000ft Over Venezuelan Airspace
In response, Maduro said that the commanders of all regions and zones of integral defence had reiterated their full loyalty to the people, constitution and homeland. According to Venezuelan Defence Minister Vladimir Padrino Lopez, the country's armed forces continue to firmly support the "constitution and legitimate authorities".

The political crisis in Venezuela recently entered its third month. The turmoil began in January, when US-backed opposition leader Juan Guaido proclaimed himself Venezuela’s interim president in a bid to challenge Maduro's re-election. Maduro, supported by China and Russia, among others, accused Guaido of plotting to overthrow him with Washington's assistance.