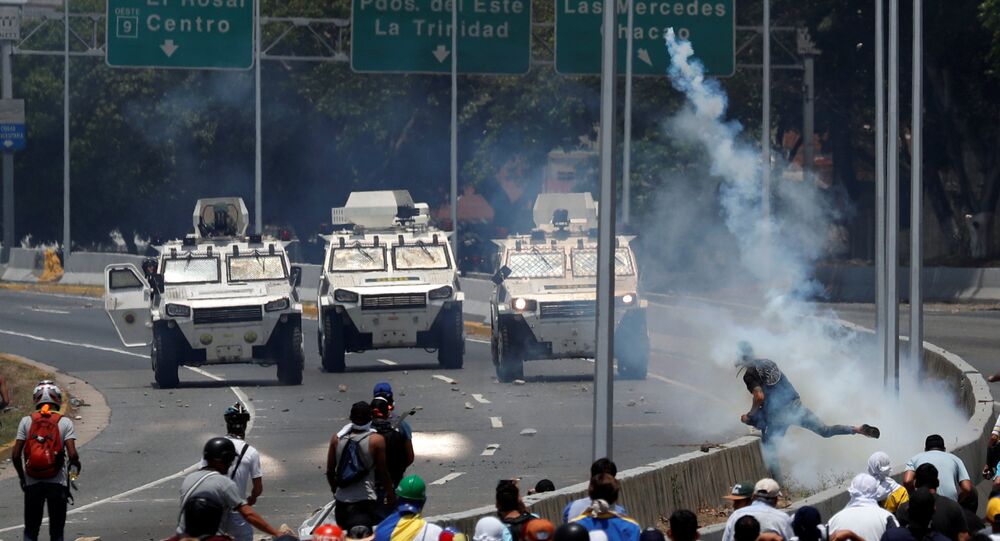 Earlier in the day, opposition leader and self-proclaimed interim President Juan Guaido urged his supporters and the country's soldiers to gather in Caracas with the aim of forcibly ousting elected President Nicolas Maduro. His efforts were denounced as a coup by the government.

Reuters has reported that an armoured vehicle ran over several protesters in the Venezuelan capital after they reportedly started throwing stones at the trucks and striking them with sticks. A graphic video allegedly showing the incident has appeared on social media. There have been no official reports of casualties so far.

Protesters gathered in Caracas after opposition leader Juan Guaido called on them, as well as the Venezuelan Army, to organise mass protests to oust elected President Nicolas Maduro on 30 April. In a video, standing beside several men in military uniform, he claimed that he had already gained the support of some Venezuelan troops; however, the country's defence minister has denied the claims, assuring that the army remains loyal to Maduro.

Maduro's government has denounced the actions of Guaido and his supporters as a coup attempt by a small group of "military traitors" aimed at filling "the country with violence". The opposition's return "to violent methods of confrontation" was also harshly condemned by Russia.

Earlier, Guaido announced that the "the largest march in Venezuela's history" would take place on 1 May, despite his failed attempts to attract significant numbers of Venezuelans to his so-called "Operation Freedom" in March.

Guaido proclaimed himself the interim president of the country in January 2019, immediately receiving support from the US and a number of other Western states, which urged elected President Nicolas Maduro to resign. At the same time, many other countries, including Russia, China, and Turkey have supported the constitutionally elected president.

Maduro considers the opposition leader to be a "US-puppet" and has accused him of conspiring with Washington to seize power in the country. He has also accused him of organising the sabotage at the country's biggest hydroelectric dam, which resulted in nationwide blackouts that lasted for weeks.

Moscow Accuses Venezuelan Opposition of Trying to Whip up Conflict