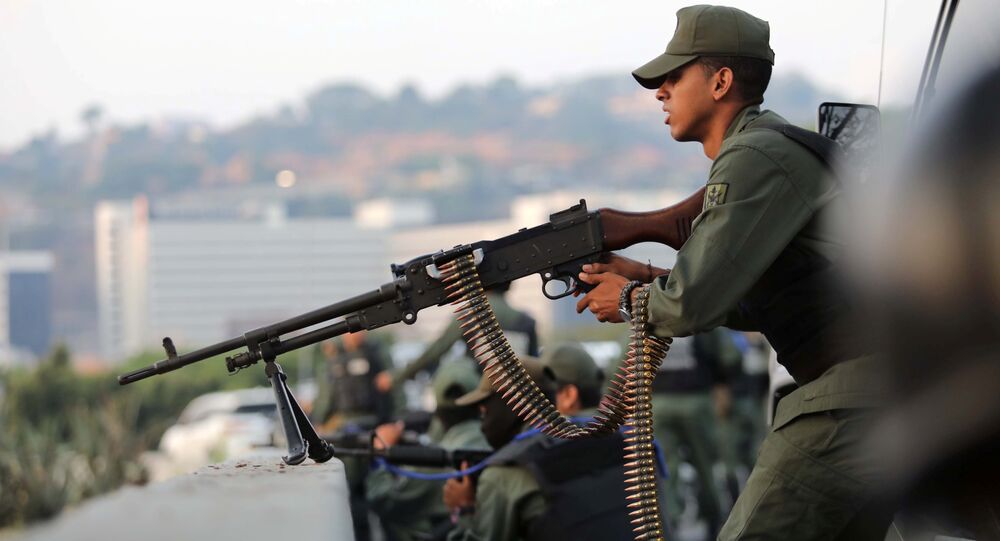 Venezuelan opposition leader and self-proclaimed interim president of the country, Juan Guaido, has published a video calling on soldiers to join the ranks of his supporters against Venezuelan President Nicolas Maduro.

Nicolas Maduro spoke out on the ongoing situation, hours after the provocative video was published, saying that he has spoken with military leaders and that they have shown "their total loyalty".

"Nerves of steel. I spoke to the commanders of all Integral Strategic Defense Regions (REDI) and Integral Defense Operations Zones (ZODI), who declared their complete loyalty to the people, the constitution and homeland. I call for maximum popular mobilization to confirm the victory of the peace. We will win," Maduro wrote on Twitter.

As if revoicing Maduro's statement, the country's Defence Minister Vladimir Padrino Lopez said that the Venezuelan Armed Forces were loyal to the constitution.

​Earlier in the day, Venezuelan Minister of Defence Vladimir Padrino Lopez said that the country's military fully supported "the constitution and legitimate authorities."

Guaido proclaimed himself interim-president of the country earlier this year, immediately receiving support from the US and a number of other western states. At the same time, many other countries, including Russia, China and Turkey have supported constitutionally elected President Nicolas Maduro.

© Sputnik
LIVE UPDATES: Venezuelan Military Remains Loyal to Maduro as US-Backed Guaido Calls for Coup
The latter considers the opposition leader a "US-puppet" and has accused him of organising the sabotage on the country's biggest hydroelectric dam with help from Washington, resulting in nationwide blackouts that lasted weeks.

Venezuelan authorities launched an investigation into Guaido's actions early in April, stripping his parliamentary immunity. He has been accused of committing treason with some of his allies also being scrutinised.