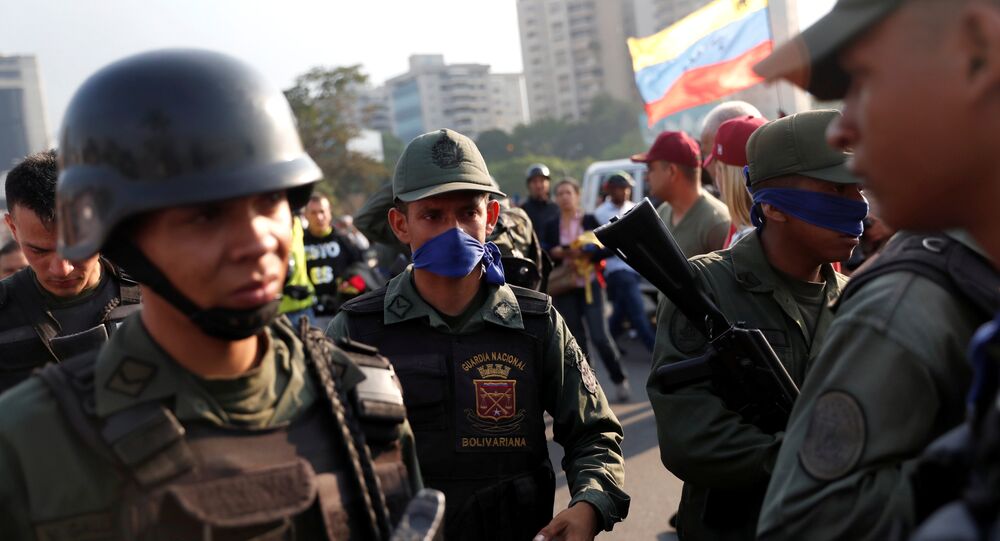 Earlier in the day, Venezuelan opposition leader and self-proclaimed interim president of the country, Juan Guaido, published a video calling on soldiers to join the ranks of his supporters against Venezuelan President Nicolas Maduro.

The Venezuelan Embassy in Moscow has shared a video with Sputnik showing that the situation near the La Carlota aviation base, where a rally in support of Venezuelan opposition leader Juan Guaido is taking place, remains calm.

Chavistas are gathering in front of the Miraflores Palace in Caracas in support of the legitimate president Maduro @NicolasMaduro chanting "We have one leader: Nicolas Maduro!" #HandsOffVenezuela By @MagdaGibelli pic.twitter.com/9rD9AFy54Z

The Russian Embassy in Caracas, in its turn, confirmed to Sputnik that the situation in the city remained calm, and the military did not side with the opposition.

"In general, the situation in Caracas is calm. The situation is completely controlled by the authorities. The military continues to be on the side of the government," the embassy said.

​Earlier, Reuters reported that shots were being heard at the Guaido rally, hours after the self-proclaimed Venezuelan head urged the country's military to stand against President Maduro. However, it's still unclear who fired the shots.

According to Reuters' witnesses, men in military uniform were seen accompanying Guaido while exchanging fire with soldiers reportedly supporting Maduro.

Prior to the reports, Venezuelan Minister for Communication and Information Jorge Rodriguez said that the authorities were dealing with a small group of military personnel who "promote" a coup in the country.