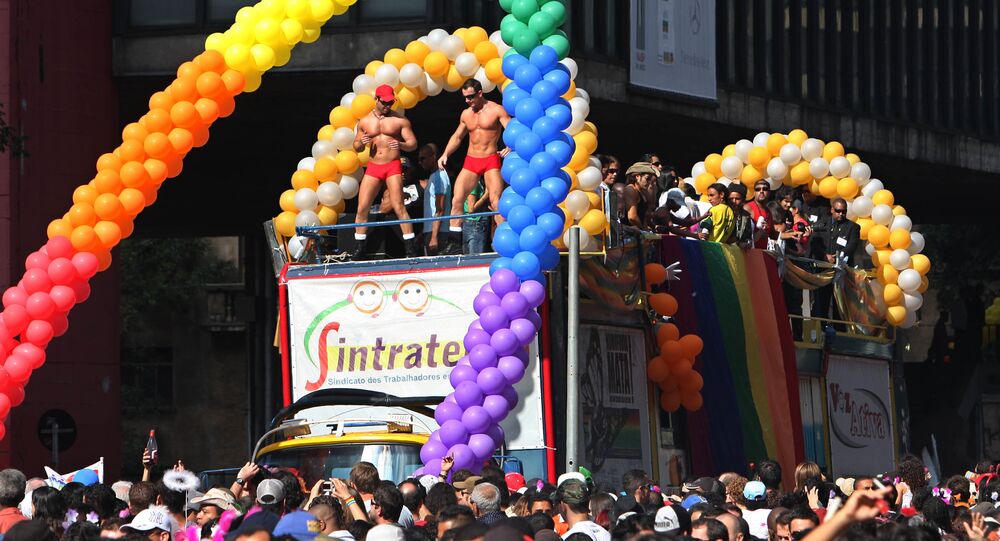 The Brazilian president once said that “homosexual fundamentalists” were brainwashing heterosexual children to “become gays and lesbians to satisfy them sexually in the future”.

Brazilian President Jair Bolsonaro has been lambasted by local LGBT members for warning that Brazil shouldn't turn into a “gay tourism paradise”.

“If you want to come here and have sex with a woman, go for your life. But we can’t let this place become known as a gay tourism paradise. Brazil can’t be a country of the gay world, of gay tourism. We have families”, Bolsonaro told a Brasilia news conference.

David Miranda, a left-wing Brazilian congressman and LGBT activist, commented on Bolsonaro’s remarks by describing him as “a national disgrace” rather than “a head of state” in an interview with The Guardian.

Miranda claimed that Bolsonaro’s comments endangered members of Brazil’s LGBT community by “putting a target on their backs” and promoted the sexual exploitation of Brazilian women.

© AP Photo / Esteban Felix
Christian Educator Fired After Protesting LGBT Teaching in School Gears Up for Legal Battle
Earlier, the Brazilian president said that he is “very proud” that he is homophobic, also claiming that “homosexual fundamentalists” were brainwashing heterosexual children to “become gays and lesbians to satisfy them sexually in the future”.

Despite Bolsonaro’s anti-gay rhetoric, David Trabuco, a 26-year-old gay evangelical Christian and make-up artist living near Brasilia, said last year that he does not see “that wickedness in Bolsonaro that others see”.

“I think we're not used to dealing with someone like him — a tough guy, strong, someone decisive”, Trabuco pointed out.