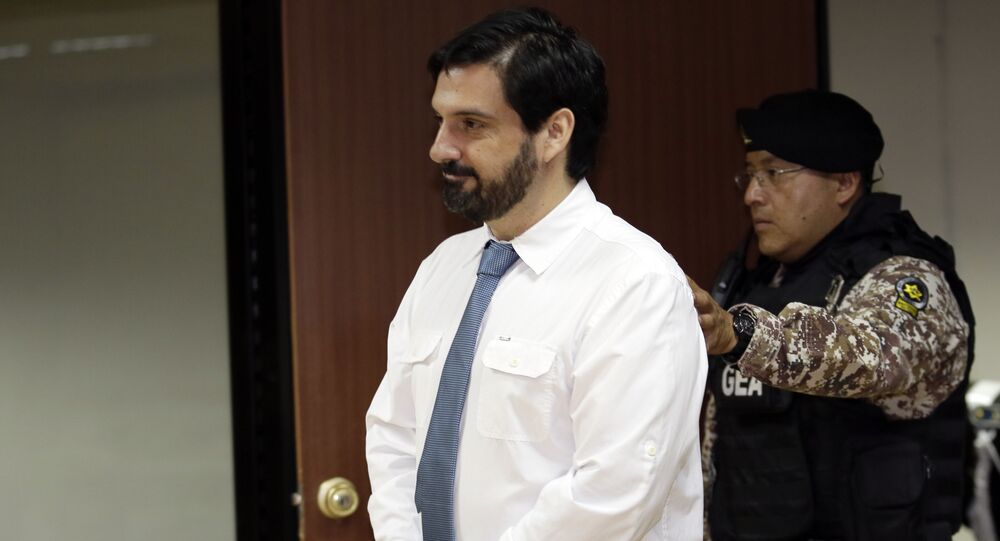 WikiLeaks founder Julian Assange had spent almost seven years in the Ecuadorian Embassy in London after he requested political asylum in 2012. However, on 11 April, Ecuador revoked his asylum and invited British police to arrest the whistle-blower, who now faces the possibility of being extradited to the US.

Paul Ceglia, an American citizen wanted by US authorities for faking evidence to support his ownership claim of the social media network Facebook, has requested asylum in Ecuador, the news agency Europa Press reported, citing the man's lawyer. The latter also indicated that the request was based on Ceglia's fear for his and his relatives' lives.

Ceglia was arrested in Ecuador in August 2018 and is currently awaiting extradition to the US, where he is wanted on fraud charges. He is accused of forging evidence related to his 2010 suit against Facebook founder Mark Zuckerberg. Ceglia claimed that he had invested $1,000 in Zuckerberg's social media network project for Harvard students called "The Face Book" in 2003 in return for a share in the Facebook enterprise later.

Zuckerberg's lawyers admitted that their client had worked for Ceglia on a project of the latter named StreetFax, but called the agreement relating to Ceglia's investment in Facebook fake. Two years later, Ceglia was arrested on mail and wire fraud charges, but fled home detention in 2015.

His request comes a day after Ecuador withdrew the asylum granted to WikiLeaks founder Julian Assange, who had been hiding in the Ecuadorian Embassy in London since 2012. Assange was arrested by British authorities over breaching his bail conditions and an extradition request from the US.

Assange claimed that he had a reasonable excuse to breach the bail conditions and fail to surrender to UK authorities, but refused to present evidence. A judge sentenced him to 12 months for failing to surrender, but the US extradition request will be reviewed later.

The US seeks to prosecute Assange in light of WikiLeaks' publication of secret Iraq and Afghan war logs and State Department cables in 2010. The US Department of Justice announced charges against Assange on the day of his arrest in the UK, accusing him of conspiring with WikiLeaks informant Chelsea Manning to infiltrate a government network containing confidential documents.

Julian Assange Has Been ARRESTED...