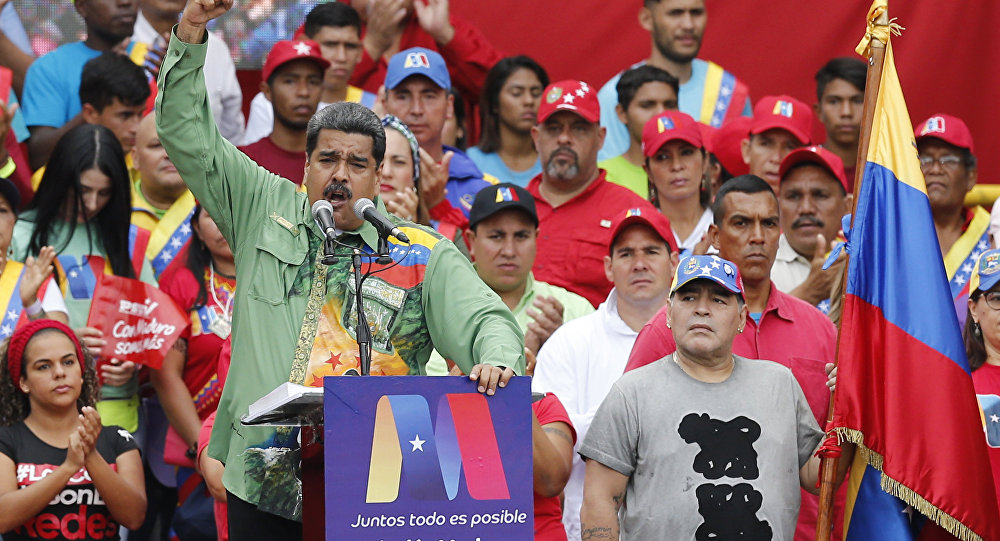 The Argentine football icon, who is coaching the second-division Mexican team Dorados de Sinaloa, has on several occasions expressed support for Venezuela's President Nicolas Maduro, saying that he would fight for him as a soldier if need be.

Diego Maradona will be fined for his public criticism of Washington's moves against Venezuela amid the ongoing crisis and his endorsement of President Nicolas Maduro.

The Mexican Football Federation said in a statement on Monday that the 1986 world champion, who has considered leaving his club Dorados and football altogether, had violated articles 7 and 11 of its ethics code.

READ MORE: 'Who Are These Yankees?' Soccer Icon Maradona Blasts US Meddling in Venezuela

Article 7 urges members of the federation to stay neutral on political and religious matters, while Article 11 warns them against behaviour that might be detrimental to sport and fair play.

Mexican football's governing body earlier noted that it would investigate his harsh comments during a presser after a 3-2 victory over rival Tampico Madero on 31 March.

Maradona, 58, dedicated the triumph to "Nicolas Maduro and to all Venezuelans who are suffering". "The sheriffs of the world — who are those Yankees? Just because they have the biggest bombs in the world they think they are so much more advanced than us. No, they are not," he told reporters.

He went on to compare Donald Trump to "chirolita", a blonde children's ventriloquist puppet that was famous in Argentina in the 1970s and bore a resemblance to the US president both in terms of appearance and mannerisms.

The football legend, nicknamed 'The Golden Boy', is a self-described Chavista and a vocal supporter of Venezuelan President Nicolas Maduro. Last year, following a drone attack against Maduro and other government officials, the football star called it "an attempt against the nation."

In August 2017, when Nicolas Maduro was facing a massive wave of protests, Maradona said he was ready to get "dressed a soldier" and fight "against the imperialism".

Venezuela's long-running political crisis heightened in late January, when the head of the opposition-controlled parliament Juan Guaido invoked the constitution to declare himself the country's 'interim president' and called on Maduro to resign.

He was immediately backed by the US and many of its allies; however, Russia, China, Cuba, Bolivia, Turkey and many other countries remained committed to supporting Maduro and urged outside powers not to meddle in Venezuela's affairs. The embattled Venezuelan president called himself a victim of a US-led coup d'état.

Last month, Guaido announced a plan dubbed "Operation Freedom" to stage a full-fledged nationwide revolution in Venezuela and seize power from Maduro. According to the self-proclaimed leader, he will be touring Venezuela accompanied by opposition lawmakers in order to organise civilian opposition groups across the country.