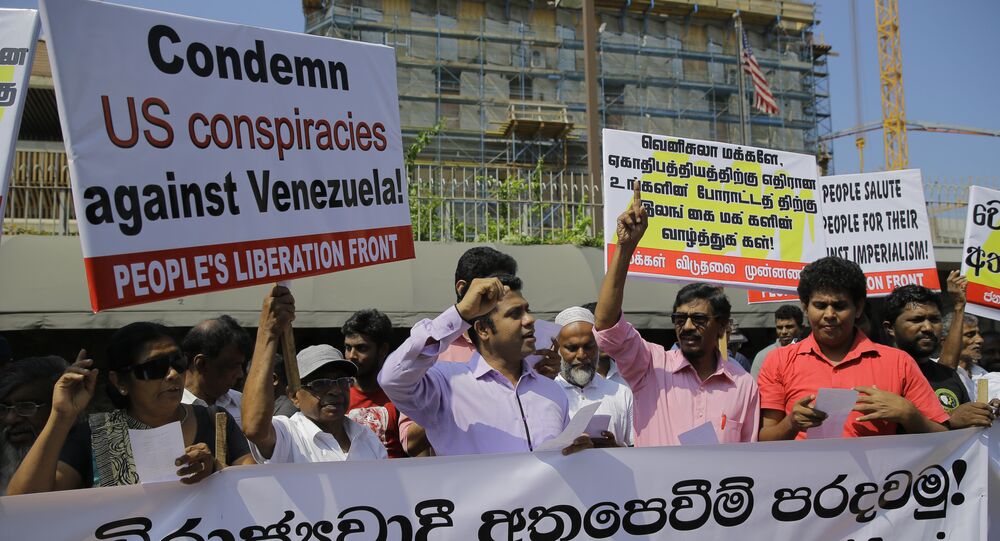 The US has repeatedly refused to take the option of military intervention in Venezuela off the table, as it continues to pressure constitutionally elected President Nicolas Maduro to resign and supports opposition leader and self-proclaimed interim President Juan Guaido. Maduro has on several occasions accused the US of staging a coup in Venezuela.

Venezuelan Foreign Minister Jorge Arreaza has stated during a meeting with his Syrian counterpart, Walid al-Moallem, that Syria and Venezuela are facing the same US conspiracy against their countries and vowed that both would emerge victorious in the end.

"I agree with Minister al-Moallem that the US conspiracy which is targeting our countries is one. The Venezuelan and the Syrian people are resisting the imperialism and the US conspiracies and they will triumph", he said.

Arreaza further slammed the US for mulling military intervention as an option to resolve the political crisis in Venezuela and noted that Syria's experience would be useful for Caracas in its fight against Washington's plans.

"Venezuela will benefit from Syria's experience in the war against terrorism in facing the US conspiracy hatched against it", the foreign minister said.

Earlier, Syrian President Bashar al-Assad drew parallels between the US intervention in Syria's internal affairs and what Washington is trying to do in Venezuela. He stated that the US' goal is "hegemony over countries and appropriation of their sovereignty in violation of international law". Assad noted that both Syria and Venezuela face sanctions and embargoes — "the standard method to put pressure on countries that disagree with [the US] agenda", as he described them.

Venezuela is embroiled in a political crisis, with the US and its allies pressuring President Nicolas Maduro to resign and supporting self-proclaimed interim President Juan Guaido. Maduro has slammed this as a coup attempts and accused Washington of planning military intervention and organising sabotage at the country's biggest hydroelectric power plant, the failure of which has led to massive blackouts.

Russia, China, Turkey and many other states have slammed the US decision to recognise Guaido and are instead supporting constitutionally elected President Nicolas Maduro.